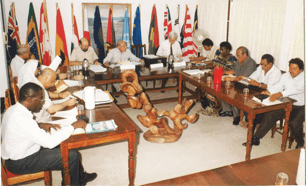 DEVELOPMENT OF A CONSERVATION PROGRAMME FOR THE IWOKRAMA FOREST

One of my significant achievements is the development of a conservation programme for the Iwokrama forest in Guyana. In 1989, at the tenth Commonwealth Heads of Government meeting at Langkawi, Malaysia, a declaration was issued on environmental sustainability. It called upon international organisations, such as the Commonwealth, to coordinate strategies to promote afforestation and sustainable forest management in developing countries, and the conservation of virgin forest to protect biodiversity. Soon after his return to London after that meeting, the then Secretary-General of the Commonwealth, Shridath Ramphal, phoned me up in Chennai. He said that he has a wonderful offer: a million acres of prime rainforests from the Government of Guyana to demonstrate how tropical forests can be conserved and sustainably used.  He asked if I could develop a programme for this purpose. Well, I had just moved to Chennai and I was busy, but nevertheless it was a great challenge — a government giving so much land for demonstrating sustainable management of a rainforest. We also have rainforests in India like Silent Valley, so I thought it would be useful to learn what possible problems could one face and so on. I acceded to his request and Dr. Promila Kapoor of the Commonwealth Secretariat put together a team and we went to Guyana.

I put together a plan for the management of this large area.  It was divided into three parts —about 600,000 acres should be kept in pristine purity as a wilderness preserve, about 200,000 acres for sustainable use and the third part for research and extension. Guyana being a poor country, it should derive income in a sustainable manner from the forests through eco-system services and creative conservation practice. The Iwokrama International Centre for Rainforest Conservation and Development (IIC) came up in 1996. I was Chairman/Trustee of the Commonwealth Secretariat Expert Group for ten years. Funding had to be organised, and the Global Environment Facility (GEF) and UK’s Department for International Development (DFID) were both generous in their help.

I went to Guyana several times. President Cheddi Jagan became a good friend. He was fully supportive and he took me around Guyana in his car to introduce the different communities, the Indo-Guyanese, the Afro-Guyanese and the native Amerindians.  The local Amerindian tribal people were a happy-go-lucky lot. They enjoyed life.  They were very conscious of their inheritance and preserved the forests very carefully. I remember one of their songs:  “The sky is held up by trees, if the forest disappears, the sky which is the roof of the world collapses. Nature and man then perish together”. The word Iwokrama means “place of refuge”in the language of the Makushi, an important Amerindian tribe. The first Field Station Manager at IIC was Fred Allicock, an indigenous expert with a wealth of knowledge who has contributed to many management decisions at Iwokrama.