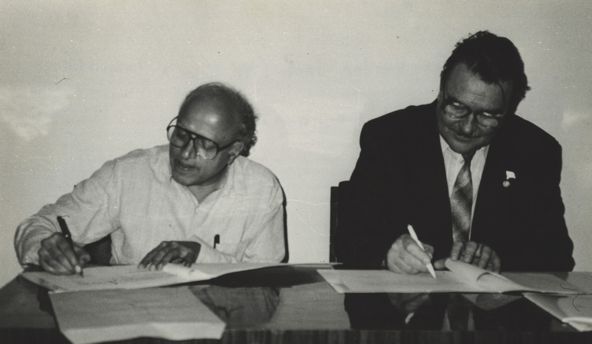 In the case of the Soviet Union, my lasting contribution has been to the strengthening of the Vavilov centre for genetic resources — the Vavilov Institute of Plant Industry, at St Petersburg. Nicolai Vavilov was a pioneer in genetic resources conservation. He’s identified centres of origin of crop plants, centres of diversity, and established the world’s largest collection of plant seeds comprising 250,000 samples of seeds, roots and fruits. I had a very good relationship with the President of the Vavilov Institute and also with the Soviet Academy of Sciences and Soviet Academy of Agricultural Sciences, now called the Russian Academy of Agricultural Sciences. At ICAR, we had strong collaboration with such influential institutions and they were very responsive and encouraged exchange of material and ideas. They had a lot of cold-tolerant material which we could take.

I must tell you an interesting and moving story about Russia’s tremendous emphasis on plant genetic diversity, all because of Vavilov. The Institute’s seedbank survived the 28-month siege of Leningrad in World War II, where several botanists starved to death rather than eating the collected seeds. Years later a visitor at the Vavilov Institute asked a young scientist there, why there had been so many starvation deaths when the grains from the seed bank could have been eaten by the scientists. Apparently the young person said, “Genes are immortal while we are mortal, and therefore we should conserve them”. That kind of remarkable knowledge of the importance of genetic conservation, that genes are immortal while human beings are mortal, is what we have to convey in our classrooms.

The main effort in Russia was introducing modern genetics. I was asked to give several lectures on heredity and the genetic enhancement of material. For a long time the pseudo-scientific ideas of Lysenkoism had dominated the scene. Lysenko was an agronomist and biologist who believed that environmentally acquired inheritance was more important than the concept of the ‘gene’. Stalin supported him and scientists who refused to renounce genetics were dismissed from their posts and even imprisoned. Several were sentenced to death as enemies of the state, including Vavilov. Scientific dissent from Lysenko’s theories of environmentally acquired inheritance was formally outlawed in the Soviet Union in 1948.

In 1978, I was elected Fellow of the Russian Academy of Agricultural Sciences. I had a very strong relationship with President Gorbachev for about ten years or so. When Gorbachev brought about reforms in the Soviet Union, there was a feeling that the Cold War will end and that there will be some peace dividend from defence to development. Gorbachev was leader of the movement to save money from so-called defence and use it for food security. The premise was that one of the nine indicators of development should be an absence of hunger and poverty. He was very interested in the International Commission on Peace and Food of which I was the Chairman. The Commission was formed in 1989 by the Mother’s Service Society, a social science research institute based in Pondicherry. It was funded by UN agencies like UNESCO, UNDP, FAO among others. It included 25 leading scientists, defence and development experts and politicians. Queen Noor of Jordan and Rosalynn Carter were members. The Commission conducted extensive research and made many useful recommendations to national and international agencies. We focused attention on possibilities to accelerate and increase developmental efforts in the world. Gorbachev hosted a meeting in Moscow and we had a good meeting on Gender and Development with Queen Noor and Mrs Carter attending it. Even after he stepped down from being the President, Gorbachev continued to be interested in environmental greening of the world and promoted sustainable development.

We also had collaboration at the highest level with Bulgaria with the establishment of an agri-business complex where value addition is done to primary agricultural products. In fact, one such centre was established in Bangalore with Bulgarian collaboration, where a number of commodities were produced.