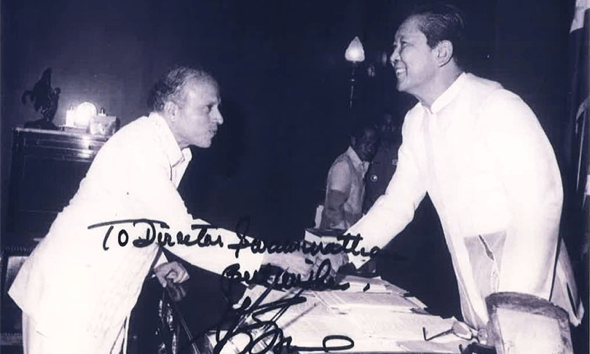 After I joined the IRRI as its Director General in April 1982, I had several opportunities to meet the then President of the Philippines, Ferdinand Marcos and later, Ms Cory Aquino, who succeeded Marcos as the President.

In my first contact with Mr Marcos, I requested him to come to IRRI to commemorate World Food Day on 16 October 1982. He readily agreed and asked me to give him a speech. I used the saying “where hunger rules, peace cannot prevail” to start the speech. He appreciated the phrase greatly and used it often on other occasions. The second time President Marcos came to IRRI in 1983 was to release the book on the history of IRRI, ‘An Adventure in Applied Science’, written by Dr Robert Chandler, the first DG of IRRI. Marcos liked the title and in his speech, he said there must be many adventures in science in the Philippines and one area which was controversial but important was genetic modification. He sanctioned the establishment of a National Research Centre for Biotechnology so that scientists can study the risks and benefits associated with this technology, now called the National Institute of Molecular Biology and Biotechnology. In spite of a lot of criticism against GM foods from the active NGO movement in the Philippines, this came up in Los Banos in 1987.

To celebrate the 25th anniversary of IRRI in 1985, we decided to honour 25 outstanding rice farmers from different rice-growing countries. I requested President Marcos to be the chief guest for the function. Very graciously, he offered to host the ceremony at his Malacanang palace. The farmers were thrilled to be his guests and received personal gifts from him. A wonderful outcome from this was a book called ‘Insights of Outstanding Farmers’ compiled by Mina. She organised a discussion with each one of them on their work. Those who were not comfortable talking in English, she got them interviewed in their own language by one of the many international scholars in IRRI. There were three farmers from India, including Nekkanti Subba Rao who is still active in seed production in rice.

For all his support to IRRI, it was not possible to get Marcos to agree to the setting up of a national rice research institute in the Philippines. He thought it was IRRI’s responsibility to look after the country’s problems too, which were quite localised with so many thousand islands making up the Philippines. We had to wait till Ms. Cory Aquino became President. Fortunately she understood that location-specific problems like soil hunger, pests and diseases, and so on could be solved only nationally and not by global research. Ms. Aquino set up a committee headed by Edgardo Angara, the President of the University of Philippines, to examine the blueprint that I had developed for the Philippine Rice Research Institute. She supported the idea and allotted land at Munoz, the main area of rice cultivation. Professor Kenzo Hemmi who was the then Chairman of the IRRI Board got Japan to contribute 10 million dollars to start the institute. I met Cory Aquino many times. Ms. Aquino was very interested in land reforms and asked me all about the Indian experience. She was a great admirer of Mahatma Gandhi. In 1987, just before I returned to India, she presented me with the Golden Heart Presidential Award.
I faced a very ticklish problem once at IRRI. Marcos had become very unpopular as a dictator and the people were rising against him. One night in February 1986 was very critical. At about midnight on that day, I had a message from the security personals in IRRI that some of the students from UPLB (The University of the Philippines Los Baños) College of Agriculture and Food Science wanted to meet me. I came down and asked them what the problem was. They said that around a hundred of them wanted to go to Manila to join the EDSA non-violent revolution against the totalitarian regime of President Marcos, so they needed transport. I was not sure what to do, because IRRI was an international centre and Marcos had been personally good to the institution too. Nevertheless, I thought the students were really keen to see democracy come to the Philippines. I gave instructions that IRRI’s three buses should take the students to Manila. That night the EDSA revolution was successful and Marcos was deposed, the US whisked him away overnight to exile in Hawaii.