Diversity in the sodium transporter, HKT1;5 within the genus Oryza 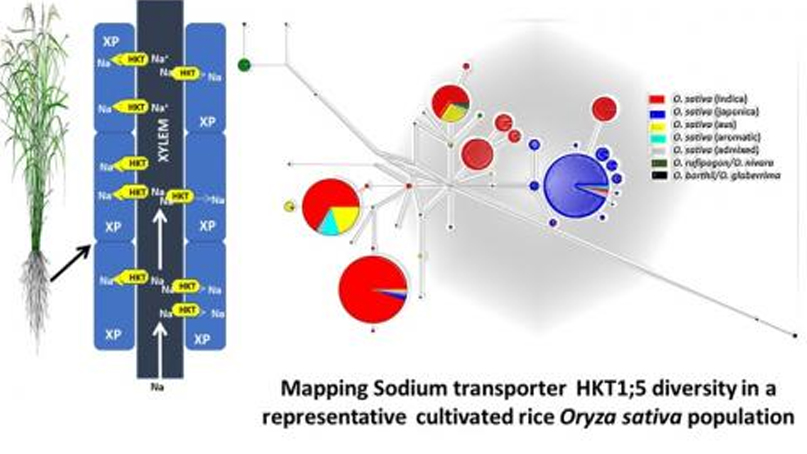 The MS Swaminathan Research Foundation’s (MSSRF) scientists examined the gene which is a crucial component of making cereal tolerant to salinity. The research paper published in 2021.Salinity is a major abiotic stress affecting rice growth and productivity. It is the most sensitive among all cereals to salinity at seedling and reproductive stages.

A global soil survey was conducted in 1970-80s, which estimated that approximately 6.5 percent of the world’s arable and marginal soils were affected by salinity or sodicity (increased sodium ions in the soil). Soil salinity refers to the concentration of salts in the soil solution. It can be due to natural as well as human-induced changes.

Salinity harms crop yield due to the accumulation of sodium in the leaves or shoots that, in turn, affects photosynthesis and grain yield. Rice among cereals is sensitive to salinity at seedling and reproductive stages. In cultivated rice (Oryza sativa), as in other grains, HKT1;5, is a determinant of salinity tolerance.

Variations in OsHKT1;5 sequence are associated with salinity tolerance that alter its sodium transporting properties.

Ms. Shalini Pulipati, a CSIR Senior Research Fellow, from MSSRF has researched along with other research scholars from the foundation. The research article also has contributions from research groups working at The National Centre for Biological Sciences, Bengaluru, National Agri-Food Biotechnology Institute, Mohali and INRAE, National Research Institute for Agriculture, Food and Environment, France.