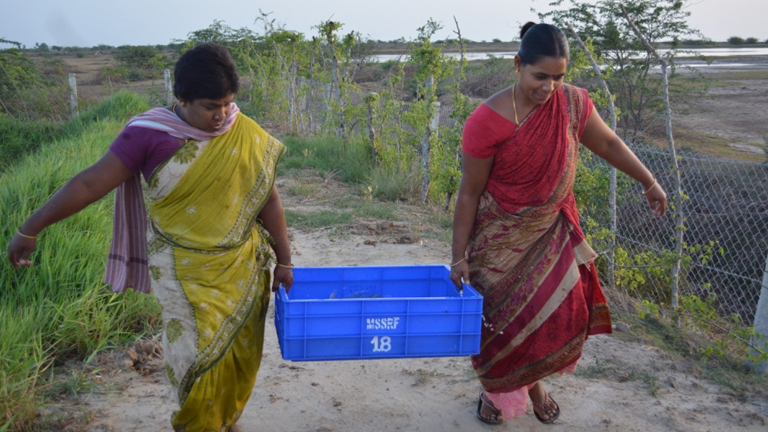 The fishing sector is largely dominated by men. The role of women in fishing largely relies on the socio-economic conditions of the households. Overall, the conditions and quality of life for women is deprived across different fishing groups and communities. This included long working hours, poor wages as compared to the men and the burden of household maintenance. Despite the various problems faced by fisherwomen, they were keen to learn new skills and attend training to improve their status in the fishing sector.

In the light of this, the Fish for All research and training centre developed a prototype for culture technology along with the local fisherwomen. To start with, four days short-term skill-oriented training programme was provided to 30 chosen women from local SHGs on the basics of fish culture, including management of fish culture pond, water quality, feed management techniques and disease management. Based on the willingness and interest levels of the participants a new self-help group with 7 fisherwomen, called “Vankakadal integrated fish culture group” was formed. A leader and a secretary amongst them were chosen to overlook the group activities and account details. Consequently, a savings account was opened for the group.

The Vankakadal group worked hand in hand with the Fish for All team from the scratch till the end. Initially, two ponds were designed for culturing the fish species, the nursery pond (36m x 30 m) and the main pond (12m x 10m); inland species Catla, Rohu (Labeo rohita), Mirgal(‎Cirrhinus mrigala) and Botala were chosen for culture. 500 seeds of each species, except Botala were cultured in the nursery, and the healthy fingerlings (200 each) were transferred to the main pond. The women were trained to check the physical water quality parameters such as pH, salinity, Ammonia, DO (dissolved oxygen) and maintain the ambient levels. The water levels were maintained at 4 feet in both the ponds.

During the culturing period, three different types of feed for the fishes were experimented, firstly rice husk, Molasses and groundnut cake, and secondly market vegetables and finally floating feed. It was found that the floating feed gave the best results for the fish growth. Overall 7 samplings were done to check the length and weight parameters of the species. On an average the weight and length of the species were, Botla 270 gm and 12 cm; Cattla 85 gm and 9 cm; Rohu 80 gm and 11 cm and Mirgal 80 gm and 12cm respectively.

The women were involved in feeding the fishes twice a day (10.15 AM and 4.45 PM), maintaining the water level, cleaning in and around the pond, weighing and marketing the catch.

The self help group faced numerous problems ranging from fish mortality, microbial infection, dissolved oxygen fluctuation due to algal bloom, feed formulation, but were able to overcome it all, by acquiring skills and scientific knowledge from the Fish for All Centre facilitators. The centre also provided linkages to partners for marketing the fresh water fishes. At the time of harvest, there was a yield of 277 kg, fetching an income of around Rs.33,500 (approximately Rs.120/kg).

The initiative has brought in a ray of hope to the lives of marginalised rural women, by making them self-sufficient and empowered in the changing environment and economy.