Kolli Hills, 70 hairpin bends and a wealth of wisdom 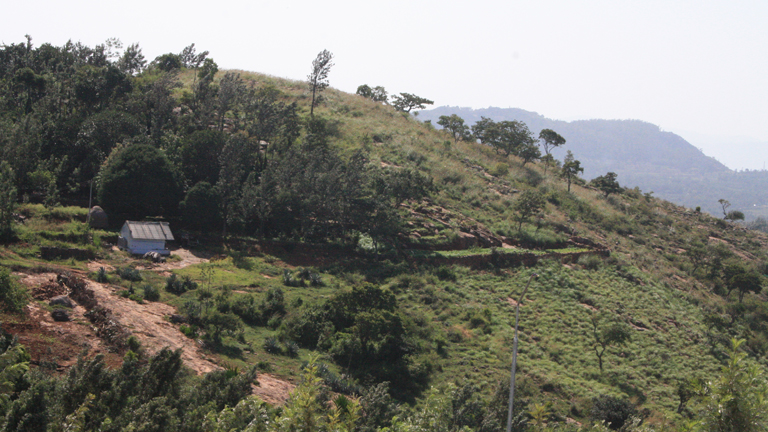 July 2017: A journey to the region where 98% of the community is classified as tribal should of course not be an easy one. This is why every trip to Kolli Hills in Namakkal District, Tamil Nadu, is a little adventure in itself. It starts first with your stomach and your inner ear – as you turn bend after bend and try not to think of what is happening. As you finally navigate the 70 hairpin bends and reach the top, you are ready to fall flat and do just about nothing at all.

This is all the more reason to salute the sheer commitment and diligence of the team of scientists, field workers and researchers who have made trip after trip here, as part of their work.  For about 30 years, MSSRF scientists have involved in understanding, living with the community, listening to their voices, learning from them and helping conserve the storehouse of wealth that this region holds – biodiversity, human wisdom, unique communities, a little world by itself. It has been sheer dedication that has held these three decades of work together.

The journey to retain and recover this knowledge has not been easy. A millet dish of long ago, a medicinal herb with rare properties, the nutritional treasure of these hills, millets which are in danger of being slowly eroded, are now being documented, conserved and revived by MSSRF’s meticulous work.

It is also a fact that using devices here is not easy. Forget internet, my mobile was pretty much non-functional as my service provider did not offer coverage here. As I fretted with a useless handset, I learnt to stop and listen instead to the voices of the communities, undisturbed by social media and internet that seem so incongruous and unnecessary here.

Moving with the breeze and terrain, observing little relics from the past, bowing down to a fearsome looking tribal deity, clambering over rock and stone, I soaked too in the natural settings in which life was lived and loved. Much of it is still unspoilt because people have their own community rules regarding nature, not because of an external force. Everywhere we went they were conscious of this sanctity. Every scientist who made a trip here must have been drawn into it, become a part of this.

As the sun set, we sat down to listen to ‘Oor Goundar’ Malaisamy who with his self-aggrandized demeanour narrated story after story, his love for the land and for the treasures evident. He spoke of how to sense every activity in the field as they worked, how to coax the best out of what the natural resource offered, how to live in harmony, how violations of nature were terrible deeds to be punished by the community. As he broke spontaneously into song, wistfully describing a beautiful maiden, he gathered tempo and his arms joined his voice in involuntary action. We sat transfixed as science and wisdom merged with the rich natural surroundings

I was thankful then, for those hairpin bends, for the limited connectivity. I was glad even as the cash crops and the FMCGs crawled up the hill, that those bends could slow them down a bit. It could probably help the ‘Malayalis’ conserve their hills as they had been used to – with neither Act nor rule, but with the deep community understanding. As we folded away another little memory, we left the hills and its music behind in hope that the same hairpin bends could perhaps keep the wealth of wisdom where it belonged, unspoilt for a little while longer. Then the Oor Goundar’s song could echo in its purity, all along the hills. It could echo as nothing else could, of the love for the land.