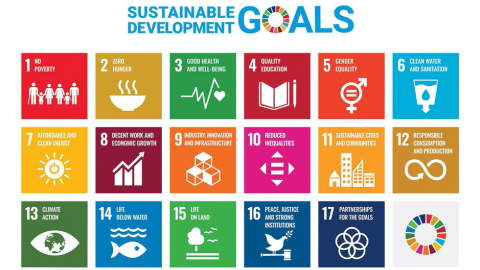 This blog gives a bird’s eye view on Sustainable Development Goals (SDGs) and their linkages to Biodiversity. It also examines the Indian experience in Biodiversity conservation and management in accordance with the SDGs, taking Forest management as a special case referring to SDGs 12, 15 & 2.

Sustainable Development is a term coined by the United Nations World Commission on Environment and Development, in its famous Brundtland Report,1987. This term now forms part of everyday vocabulary as an organizing principle that aims to foster human development, while at the same time preserving and safeguarding natural resources for future use. The 2012 United Nations Conference on Sustainable Development gave the world 17 goals, which are known as Sustainable Development Goals (SDGs). A period of 15 years, from 2015-2030 was earmarked to achieve these goals which will be measured by a list of 169 indicators. The SDGs replaced the Millennium Development Goals (MDGs), which had a more concentrated and more limited application, that being, eradication of poverty with a focus on middle- and low-income countries. The SDGs on the other hand offer no such distinction and are equally applicable to all.

As we are now halfway through the sixth year of the earmarked 15 years, it is befitting to look at where the world collectively stands. The three approaches to achieving sustainable development are mitigation, adaptation and inaction. With respect to mitigation and adaptation, the call to action is that of ‘ localization ’, but the effect of steps taken in the direction, or in the opposite (which can take two forms, one being counter-productive to SDGs or two, choosing to take no action, whatsoever) as the disposition of those in power may be, will count for the whole world. Some aspects where progress is lacking as highlighted by the Secretary General’s Report, ‘ Progress Toward Sustainable Development Goals , presented at the 2019 Session, are- hunger being on the rise for the third consecutive year; loss of biodiversity at an alarming rate; continued rise of greenhouse gases etc. With the COVID-19 Pandemic upon us and its far reaching impacts, it is believed that progress could be set back by years as inequalities, unemployment etc exacerbated the disease and the resultant decisions the governments were forced to take.

Here we are making an effort to closely look at the biodiversity-related SDGs. Though Goal numbers 1, 2, 3, 5, 6, 8,9,11, 12, 13, 14, 15, 16 & 17 are identified as the biodiversity-related goals by the Convention on Biological Diversity (CBD) , goals 14, 15, 2 and 6 can be identified with biodiversity-explicit targets. It may be worthwhile to read together with the theme of this year’s World Environment Day (WED 2021) with SDGs 14 & 15, concerning Life below water and Life on land. ‘Reimagine, Recreate, Restore’ is the slogan of WED 2021 and this year marks the beginning of the United Nations Decade of Ecosystem Restoration . ‘Conserve and sustainably use the oceans, seas and marine resources for sustainable development’ says Goal 14 and “Protect, restore and promote sustainable use of terrestrial ecosystems, sustainably manage forests, combat desertification, and halt and reverse land degradation and halt biodiversity loss”, says Goal 15.

Convention on Biological Diversity (CBD) on its 14th Council of Parties observes that biodiversity and ecosystems feature prominently across many of the SDGs and associated targets, as they contribute directly to human well-being and development priorities. Biodiversity is also at the centre of many major economic activities, such as agriculture, animal husbandry, forestry, and fisheries. CBD also estimates that globally, nearly half of the human population is directly dependent on natural resources for its livelihood. At this juncture, referring to the biodiversity-related SDGs and their targets demands a close look at the international policy regime that governs biodiversity.

Table: Illustration of the enabling, contributing and potential constraining relationships between biodiversity and the Sustainable Development Goals

**Refers to a relationship in which addressing the Sustainable Development Goal will improve the enabling environment for addressing biodiversity issues.

Table adopted from: CBD Secretariat (2017), Biodiversity and the 2030 Agenda for Sustainable Development (CBD/SBSTTA/21/2/Add.1).

It was in the 10th meeting of the Conference of the Parties of CBD (2010) held in Nagoya, Aichi Prefecture, Japan, the Strategic Plan for Biodiversity, including the Aichi Biodiversity Targets (ABTs) , for the period 2011-2020 was adopted. This has provided an overarching frame of biodiversity management and has also set the structure for priority actions in the area. The Strategic Plan and the SDGs are mutually supportive and reinforcing, and therefore the implementation of one contributes to the achievement of the other, the CBD observes. The Biodiversity and The 2030 Agenda for Sustainable Development (CBD, 2020), is also consistent with other existing international commitments, including the Strategic Plan for Biodiversity.

This article first appeard on http://vedanam.canfoundation.in/blog_nature.php