Without Bonn, there is no Paris 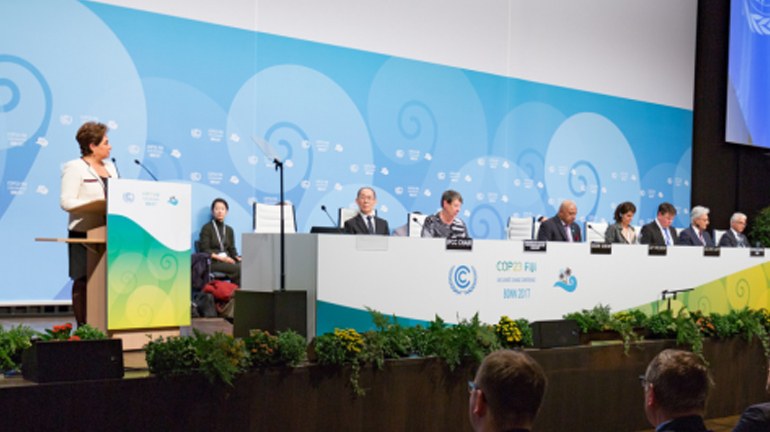 This year’s UN Climate Change Conference kicked off in Bonn on November 6 and will go on till November 17, 2017 with strong, unified calls to hold to the path of the Paris Climate Change Agreement1. The island nation Fiji, is presiding over the COP (Conference of Parties) as the Presidency; the UNFCCC Secretariat will be hosting COP23 at its headquarters in Bonn, with the support of the German Government and the City of Bonn.

It is very likely that 2017 will emerge as one of the three hottest years on record, with many high-impact events including catastrophic hurricanes and floods, debilitating heat waves and drought. Long-term indicators of climate change such as increasing carbon dioxide concentrations, sea level rise and ocean acidification continue to be a cause for concern. Arctic sea ice coverage remains below average and previously stable Antarctic sea ice extent was at or near a record low2. All the science, and the mauling that extreme weather has inflicted this year from floods in India and Nigeria to hurricanes in the Caribbean and wildfires in the US and Europe, indicate that global emissions need to start falling urgently – in the next few years. The Paris Agreement set out principles, but not the details, but the Bonn meeting will be vital in building the rules that will enable the Paris deal to work3.

Among the many technical issues, parties will discuss further guidance in relation to mitigation, including on the features of Nationally-Determined Contributions (NDCs). This includes coming up with international standards for how to measure carbon emissions, to make sure that one nation’s efforts can be compared to another’s. A second debate centers around how countries take stock of what has been achieved and set new, more ambitious goals for curbing carbon emissions after 20204. Discussion will also take place in relation to

However, the main aim of COP 23 at Bonn is, two years after the COP 21 Paris Agreement was signed, how signatories can implement their commitments6.

This Paris Agreement’s implementation “rule book” is scheduled to be finalized in Poland next year. Therefore, this will be an important COP to watch for signs of the work for next year, and how countries can stick to their timeline to deliver an effective road map to achieve the goals of the Paris Agreement7. In other words “Without Bonn, there is no Paris”

In conversation with the 2022 MSSRF media fellows

The MSSRF library – a storehouse of scientific knowledge