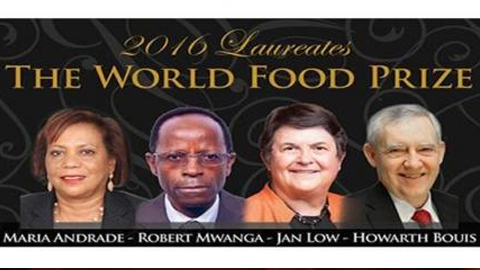 Chennai, June 30, 2016: The World Food Prize that recognizes outstanding work by individuals towards enhancing quality, quantity or availability food in the world will be awarded this year for four individuals for their work on biofortification. Drs. Maria Andrade, Robert Mwanga, Jan Low and Howarth Bouis were announced as the 2016 World Food Prize Laureates by the US State Department in Washington on June 28, 2016.

The work on Orange Fleshed Sweet Potato (OFSP) by Drs Andrade, Mwanga and Low of the International Potato Center has been recognised as the “single most successful example of biofortification”. Dr Bouis founder Harvest Plus at IFPRI, was named for pioneering “the implementation of a multi-institutional approach to biofortification as a global plant breeding strategy”. The four will share the $250,000 prize that will be awarded at a ceremony in Iowa, in October this year. The World Food Prize estimates that over 10 million persons are now positively impacted by biofortified crops, with a potential of several hundred million more in the coming decades thanks to the efforts of these four laureates.

Prof M S Swaminathan Founder MSSRF, who is the Chairman of the Selection Committee for the World Food Prize, said “Biofortification is an economic and effective mechanism against malnutrition that is prevalent in a majority of the population in the world and especially in India. MSSRF would be glad to facilitate a garden of biofortified plants so that this material may be made available for the community. I hope this award will generate greater interest in biofortification.”

Biofortification is a means of deliberately increasing the nutrient quality of crops during growth for the purpose of enhancing the nutrition and health of the population it serves. This is particularly important for those who are have micronutrient deficiencies (Vitamin A, iron and zinc), which are estimated to affect over half the population in the world, especially in India which has the largest number of stunted children in the world. The process addresses all the three major dimensions of hunger – calorific, protein and vitamin / mineral deficiencies. It can be done through natural selection, conventional breeding or biotechnology approaches. Through biofortification, communities can receive additional nutrients through their regular intake of staple food and be protected from preventable conditions such as anemia, stunting and infectious diseases.

MSSRF has been taking efforts towards biofortification of rice with enhanced iron and zinc since 2008, working with a total of 160 landraces and varieties of rice from Odisha, Tamil Nadu, Andhra Pradesh and Kerala. The scientists have been engaged in identifying high zinc and iron content rice and introducing those traits into high yielding varieties through conventional plant breeding. Since rice is a major staple food of over half the world’s population, this initiative holds promise to address malnutrition.