The International Day of Biodiversity Commemorated at MSSRF 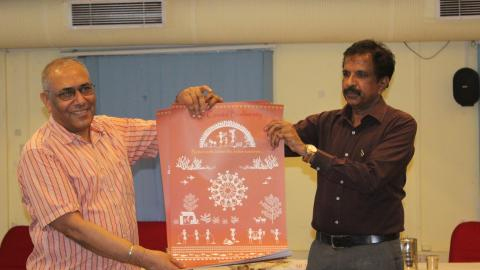 Chennai, May 22, 2019: M S Swaminathan Research Foundation commemorated the International Day of Biodiversity at its premises today. The Founder of the organisation, Prof M S Swaminathan, had released a message in his twitter for the International Day of Biodiversity. “During 2019, MSSRF is introducing 2 new significant programmes designed to promote community conservation and utilization of biodiversity. The first initiative is the organisation of Genetic Gardens of Biofortified plants rich in Vitamin A, iron, iodine and other micro-nutrients. These genetic gardens will be organised all over the country, both as an educational tool and a source of raw material for farming systems for nutrition (FSN). The second initiative is the organisation of a Medicinal Plants Bio-valley starting from the Silent valley forest and going up to Wayanad. The aim of the bio-valley is to involve local communities in conservation and sustainable and equitable utilization. It is anticipated that about 1000 farm men and women would be involved in the first bio-valley in Kerala. It is hoped that all over the country, more genetic gardens of bio-fortified plants and herbal bio-valleys which can safeguard the ayurvedic heritage of Kerala will be organised”, he said.

During the talk of Dr N Anil Kumar, the Executive Director of MSSRF who highlighted ‘MSSRF’s thrust on Biodiversity Conservation for Food and Health’, said that Professor M S Swaminathan aim had always been ‘food for all’ and that paved India to become food self sufficient. When we take food production, the important aspect for sustainable food production is the Biodiversity. He recalled the late Prime Minister Indira Gandhi saying that conservation of Biodiversity is not an environmental issue but a social issue.

A special address was given by Dr Yugraj Singh Yadava, The Director of the Bay of Bengal Programme Inter-Governmental Organisation, on ‘Marine Biodiversity and Food Security of India: Can seaweeds turn the tide’! He said that the ecosystem approach for sustainable development is ensuring economical well-being and human well-being with effective governance. While presenting on the status of marine biodiversity in India, he pinpointed that of about 46 commonly exploited species, 10 species are fully exploited and 5 are fully or over-exploited (FAO 2005, 2008) and while talking about the prospects of the seaweed, he stated that the seaweed farming in India has increased and we must also get adapted to nutrition through consumption of seaweed which will help to fight undernutrition in an effective manner.

Dr G.N. Hariharan, the Director of the Biotechnology programme in MSSRF presented on ‘Genetic Garden of Nutritionally Fortified Plants’ and explained on the food based approach to eradicate malnutrition and bringing nutrition focus to farming systems through naturally nutridense plants and biofortified crop. This approach is expected to provide multiple benefits including, bridging the disconnect between agriculture and nutrition, bringing  nutritionally important crops to the farms, awareness on nutrition related issues to the consumers and consumption of nutritive and balanced diet by the people and leading towards a healthy society. He also said that MSSRF has started a programme to grow nutri-rich plants and is establishing gardens in highly malnourished or vulnerable districts namely Palghar, Maharashtra, Thirur, Tamil Nadu, Kanpur Dehat, Uttar Pradesh and Jeypore campus of MSSRF, Odisha.