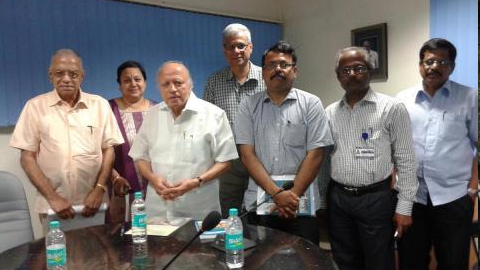 The 29th Annual General Body Meeting of the Centre for Research on Sustainable Agricultural and Rural Development (CRSARD) was held at MSSRF, Chennai on September 20, 2016. The meeting began with a minute of silence to Dr S Rajagopalan, who had earlier been Secretary of CRSARD. Prof M S Swaminathan, Founder MSSRF welcomed the gathering. The meeting confirmed the minutes of the 28th AGM held on September 15, 2015. Mr G Venkataramani, Secretary CRSARD, welcomed Dr V Selvam, Executive Director of MSSRF to speak and the meeting also recorded its appreciation to Dr Ajay Parida, former ED of MSSRF and currently Senior Fellow at the Foundation for his services.

Dr Selvam, presented the highlights of the activities of MSSRF during 2015 – 16 who emphasized the mission of the Foundation in developing models for large-scale adoption. He shared the key initiatives taken up across programme areas of Coastal Systems Research, Biotechnology, Biodiversity, Ecotechnology, Food Security, Information Education and Communication and Gender and Development.

The members discussed various initiatives that could be taken up by the Foundation including medicinal plant research, programmes for sustained development of students and youth, awareness of efforts in peri-urban agriculture, value additions in dairy farming as well as village adoption programmes. The Executive Director said these suggestions would be discussed at the Council of Directors of MSSRF since they cut across different programme areas and appropriate steps would be taken to move these ahead.

The meeting also resolved to adopt the audited accounts for the year 2015 – 16 presented by Ms Malavika Vinod Kumar, Treasurer of CRSARD.

Prof Swaminathan summed up the need for anticipatory, participatory, translational and applied research in order to convert hotspots of human suffering to happy spots.

Mr Venkataramani proposed a Vote of Thanks to all participants and the meeting concluded.