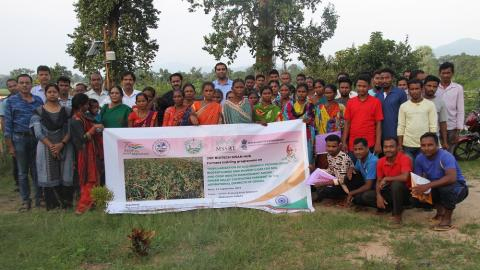 The programme is for empowering small and marginal farmers in aspirational districts of the country. Under this, selected farmers are taken on exposure visit to leading science laboratories and help them to grow as scientific leaders at the grass-root level.

Odisha-based Sub-hub I organised a three-day training programme on the theme “Promotion of eco-friendly technologies to enhance soil health and sustainability” between 16th September and 18th September 2021 to commemorate Seventy-Fifth year of India’s Independence as ‘Azadi Ka Amrit Mahotsov’. The event was organised in the collaboration with the ICAR-IISWC Sunabeda, Koraput district.

Around 200 farmers including women farmers from three aspirational districts of Odisha – Koraput, Rayagada and Malkangiri – participated in the event.

Resource persons from Department of Agriculture and Farmers’ Empowerment of Government of Odisha, scientists from MSSRF, Chennai & Jeypore centre, and IISCW explained different available technologies for soil health management and water conservation, and improved agronomic practices to enhance millet cultivation under rain-fed conditions such as line transplanting, and system of millet intensification (SMI).

The resource persons also promoted the use of biofertilizer and biopesticides for soil and crop health management among finger millet cultivating farmers. They explained farmers how use of bioinoculants and organic manure helps in reducing input costs, improves soil health and enhances the income of farmers.

Voice of farmers from Koraput

a.Mr. Tanka Chendia said that he has been trained on improved agronomic methods of millet cultivation such as line transplanting and SMI, which reduced the cultivation cost and increased the yield. First time, we came to know about Cycle weeder and the use of bioinputs like Trichoderma, Rhizobium, Azotobacter, Pseudomonas for soil health management and disease control.

b. Mr. Sivaram Bandhia: We had been using traditional agronomic practices for finger millet cultivation such as FYM application, broadcasting method of sowing seeds, one hand weeding without hoeing the soil. But, in the training programme, we learnt on improved technologies – line sowing of finger millet seeds/line transplanting, the use of Cycle-weeder for weeding and use of bioinputs instead of chemical fertilisers for soil and water conservation.

c. Ms. Reena Pangi shared that she learnt line sowing and line transplanting methods for finger millets. Earlier, people were using traditional methods to remove weeds which was labour intensive, but with the emergence of new technology such as Cycle-weeder, which help in reducing drudgery among women and also proved cost effective.

Voice of farmers from Malkangiri

a.Mr. Sana Galari expressed that the training programme helped him to learn various methods of cropping strategies such as use of Cycle-weeder and bioinputs which reduced the cost and time required for cultivation. We

acknowledge such training programmes and would expect some more training on pest and disease management using biocontrol methods in the coming days”.

b. Ms. Lalita Mandi narrated her positive experiences about use of various bioinputs like Pseudomonas, Azospirrillum and Trichoderma. These bioinputs keep soil light, increase productivity of crops and reduce the chances of occurrence of pest and disease.

c. Mr. Laxminarayan Tukmia said that we received training to use of improved techniques like line transplanting and use of bioinoculants like Pseudomonas and Trichoderma from the project DBT KISAN hub for millet production. We have been practicing indiscriminate use of chemicals fertilisers. After this training, we will use bioinputs based on Soil Health Card to increase production and reduce yield.

Voice of farmers from Rayagada

a.Mr. Surendra Majhi shared his experience that the Biotech KISAN Hub imparted new methods for the cultivation of finger millet such as line sowing and line transplanting and use of Cycle-weeder. We were trained about the use of bioinputs instead of chemical fertilisers and as a result we harvested better yield of finger millets. We use various biofertlisers like Pseudomonas, IFFCO NPK (Biofertilizer), IFFCO-Sagarika (sea weed extract) and Trichoderma.

b. Ms. Sumitra Majhi shared that they received training from the members of the project Biotech KISAN HUB about the use of bioinputs in various crops. Previously, our seed sowing method was traditional which affects our yield. After this training, we are going to change our strategy. We will treat our seeds first with biofertilizers, then broadcasted in the nursery bed. After 10-15 days’ interval, the seedlings would be transplanted in lines. The use of Cycle-weeder gained importance as it reduced labour cost and time. With the use various bioinputs, the yield increased and there is lot of positivity among the farmers

A video on the improved agronomic practices- such as raising nursery bed, line transplantation, System of Millet Intensification (SMI) was played to reiterate the learning. The video also explained how the adoption of these methods helps in enhancing yield. Another video on the processing methods using machines and preparation of different value-added products of millets was played.