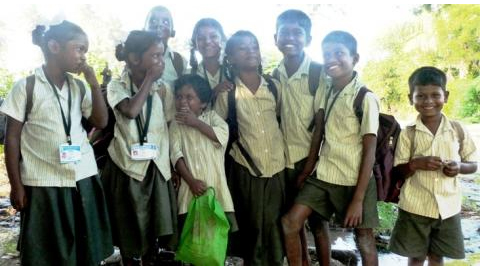 Vinayagampet, the village adopted by M. S. Swaminathan Research Foundation under the Biovillage Programme, received the ”Best Child Village Award” in Union Territory of Puducherry, for its “Holistic Development and Child Friendly Nature”. This Award is promoted by Students / alumni, of Pondicherry Engineering College and Pondicherry University, through their network – MUGHIL. The recognition carries a Cash Award of Rs. 10,000/, which the Vinayagampet Bio Village Development Committee (VBDC), received.

Explaining the process, Dr Vidya Ramkumar, Principal Scientist , MSSRF  says “When the award was called for, the Biovillage Team intimated the VBDC and they applied for the award. On receiving the application, a team came to the Vinayagampet Village, to review the activities. They conducted interviews and focus group discussions with the VBDC, Villagers and Children at the Tuition centres and took photographs and video, as documentary evidence.”

The Selection was based on the criteria:

On December 20, 2014, Vinayagampet Villagers received the Award! It is not only a proud moment for the villagers, but an indication that with just a little support like what MSSRF had provided, communities can move ahead a long way expanding their capabilities, providing a safer environment for children and adults.