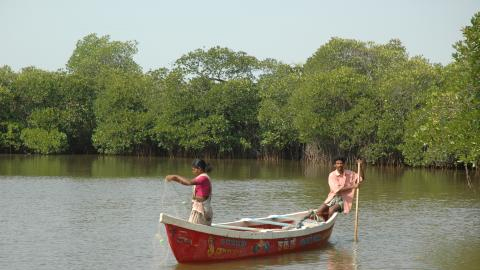 September 6, 2019: Put them together in one room and agriculture scientist Prof M S Swaminathan and former minister and sitting MP Jairam Ramesh zero in on one topic that they are both passionate about – conservation of land. How was one of India’s richest mangrove resources, the Bhitarkanika saved? How did the cheetah nearly become a symbol for land conservation?

The two caught up during the MP’s visit to Chennai recently and these and other anecdotes figured. In the backdrop of the UNCCD COP14 which has land degradation as the primary agenda, and the Climate Week, a number of experiences and suggestions emerged during a conversation between the two who had steered India’s coastal management policy. Excerpts from their conversation:

Jairam Ramesh: “I wanted to make the environment ministry more science-based. The Ministry of Environment was more scientific till 1980-85. Dr Swaminathan, helped make it more scientific. It was based on his recommendation that we created the Indian Council for Forestry Research and Education an ICAR type of an institution. One question I would like to ask you sir, we have not been very successful in reclamation of so-called wastelands. One theory I have is that there is no such thing as wasteland. Land in India is usually used for something or the other. There is only wasted land. Unfortunately, I even discovered that many grasslands in India are also classified as wastelands.

Prof Swaminathan: That’s true. In fact, in the case of many of the things we have lost, the challenge is really, how we can recover all of this.

Prof Swaminathan: Like the grasslands, the mangroves for instance are yet another type of ecosystem that we need to focus on. The densest mangrove forest in the world is Bimaru. This is followed by Bhitarkanika in Odisha. They were cutting down the mangroves for resettlement of refugees and for an airport from Bhubaneshwar to Jakarta. When one of our scientists Hemal told me that they were cutting down mangroves, I said let’s go there. She explained to the Chief Minister, the importance of these mangroves. He first laughed and said, forget about this. However, when she persisted and asked do you know how long it takes for mangrove forests to grow? He then, whispered something and when his principal conservator of forests came in, he told him, ‘Not one mangrove should be touched without the written permission of Dr Swaminathan’. That’s how those forests were saved and I hope they stayed that way.