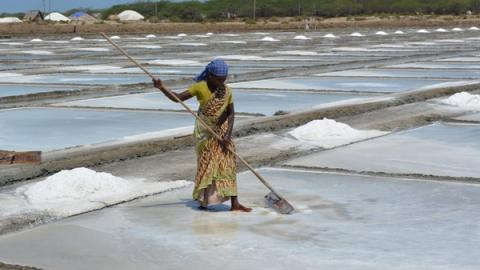 Chennai June 26, 2014: A three-pronged action plan was suggested by experts and various stakeholders to address the issue of occupation-related health ailments among salt workers. This was the result of a consultative meeting held at the M S Swaminathan Research Foundation here today.

The meeting deliberated and suggested an action plan that included:

Recalling the salt marches during the independence movement, Professor M S Swaminathan, Founder MSSRF said “It was a struggle for freedom then, it is a struggle for freedom from occupational hazard now. We need to put the faces before the jobs. With appropriate awareness and analysis, there was need to focus on action in this case.”

Dr Ajay Parida, Executive Director, MSSRF explained that the Foundation had focused on ecological restoration, but moved to health issues when they found people from 23 of the 49 villages in their intervention involved in salt labour. MSSRF had started a healthcare programme with the support of Society for Integrated Coastal Zone Management of the Ministry of Environment and Forests, Government of India and the World Bank.

This consultation was an effort to bring various stakeholders – from the Salt Commission, the Health department, labourers, unions and others working in these regions across the table to discuss the issues.

Dr Sowmya Swaminathan, Director, National Institute for Research in Tuberculosis, spoke about the working conditions in salt pans. “Most workers who work in salt pans leave home early and do not carry food or water. What is worse, most of the locations do not have basic water or toilet facilities in their place of work. This leads to many problems, especially for the women workers.”

Dr R S Kashyap, Deputy Salt Commissioner, Chennai, highlighted the Health programmes of the Salt Commission of India and urged the State to follow the “Gurajat model” where there were many welfare schemes for salt workers including water supply, rest sheds, general health camps and supply of safety kits for the labourers.

Salt workers from Vedaranyam shared their experiences and struggles, especially with regard to lack of awareness and receipt of social entitlements. Anjammal, who has been working for over 30 years shared the distress that women labourers faced, from sanitation to medical problems and urged officials to help them. Experts called for greater transparency and awareness of schemes among workers and greater co-operation from manufacturers so these issues could be addressed.