‘Ending hunger is an idea whose time has come, Vajpayee had said’ 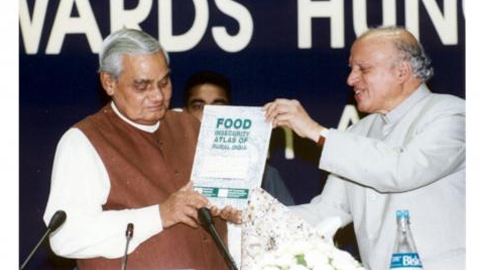 Chennai, August 17, 2018: The late Shri Atal Bihari Vajpayee, along with then scientist former President APJ Abdul Kalam, is acclaimed for the Pokhran II nuclear test, but there is a lesser-known story of the former PM’s humanitarianism associated with that event. At a condolence meeting convened at MS Swaminathan Research Foundation on August 17, to pay respects to the former Prime Minister who passed away on August 16, Professor M S Swaminathan recalled the anecdote while reminiscing about the “people’s politician”.

“While releasing the Food Insecurity Atlas of Rural India (produced by MSSRF) in New Delhi, Shri Vajpayee had said, ‘Ending hunger is an idea whose time has come,’” Prof Swaminathan recalled, reiterating that it is still the need of the hour.

Shri Vajpayee had great faith in Indian scientists, Professor Swaminathan said referring to the Pokhran nuclear tests. He also pointed out that the former Prime Minister was keen on learning and working with technology from outside India, for eg., water technology from Israel and post-harvesting technologies of the Netherlands.

Not just technology, Shri Vajpayee also realised the need for good infrastructure — for a good road network, to be specific — and began large-scale work towards achieving it. “When MSSRF was setting up the Bio-village centre in Puducherry, the roads were in a bad condition, but Shri Vajpayee’s thrust on building better roads has resulted in the fabulous roads we see today,” Prof Swaminathan said.

Dr V Selvam, Executive Director, MSSRF said it was a testament to Shri Vajpayee’s work that he was honoured with the highest civilian award, the Bharat Ratna, in 2015, and that his birthday, December 25, is being marked every year as ‘Good Governance Day’.

At the end of the condolence meeting, staff, scholars, and scientists at MSSRF observed two minutes’ silence in honour of Shri Vajpayee and paid floral tribute.