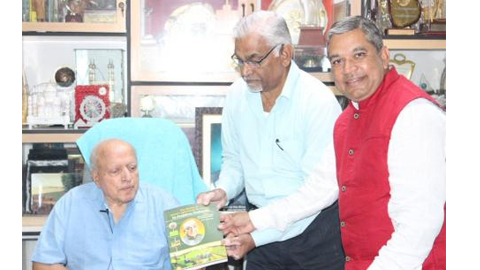 Chennai, November 22, 2018: Ahead of the 120th birth anniversary next month of Dr Panjabrao Deshmukh, the first Union Agriculture Minister of independent India, Professor M S Swaminathan said that there would be no farmer protests today had the government implemented the ideas of the esteemed late minister.

Speaking to representatives of the Shri Shivaji Education Trust established by Dr Deshmukh, who visited Professor at the MS Swaminathan Research Foundation in Chennai on Thursday, November 22, 2018, he recalled Deshmukh as an educationist, political policy maker, scientist and visionary.

“It is the market and the monsoon that determines farmer welfare. Dr Deshmukh tried to make the market farmer-oriented in order to ensure the economic sustainability of farming, Had his ideas been implemented, farmers would have no need to come out on the streets and protest today,” said Professor Swaminathan

The Professor, who has worked closely with the former minister in laying the foundation for systems to attain food security in India, called Dr Deshmukh a transformation agent. “He was instrumental in changing the status of India from its ship-to-mouth existence, dependent on PL-480 imports of foodgrain, to becoming a self-sufficient food-producing country which has enshrined the Right to Food as a constitutional right,” said Professor Swaminathan.

Dr Deshmukh played a role in modernising agriculture and laying the foundation for sustainable food security. He authored the Food Security Plan of India, and promoted integrated farming of crops and livestock. He propagated crop husbandry, animal husbandry, fisheries and forestry as an environmentally conscious agriculture minister, recalled Professor Swaminathan. Dr Deshmukh also promoted horticulture and the dairy industry as a step towards attaining nutritional security in the country.

Agriculture was not just important for food security but also for cultural security, believed Dr Deshmukh who understood that agriculture had a larger dimension in the then agrarian nation of India where customs and traditions evolved from this primary occupation.

Dr Deshmukh saw science as an important tool for the transformation of the country. “As Agriculture Minister, he would regularly write letters to state ministers of agriculture to warn them ahead of imminent drought and advise them on the steps to prepare for it. He would pass on insights on pest control and so on. He used to share the draft of the letters with me, and several ideas emerged from our discussions,” said Professor Swaminathan.

“He also felt that sitting in Krishi Bhavan alone would not accomplish much; he used to visit farmers along with me and listen to their concerns and viewpoints,” said Professor Swaminathan. In fact, later when the National Commission for Farmers was constituted in 2004, Professor Swaminathan who was its chairman, ensured too that the views of the farmers were among the bases of the four reports that the NCF submitted to the government to achieve faster and more inclusive agricultural growth.

Speaking of the current protests in Mumbai by 20,000 farmers against the government’s delay in attending to their economic well-being, Professor said, “We had all the ingredients in the NCF reports for making farming economically viable and ensuring farmers’ welfare. But governments resort to easy politically-gainful options like loan waiver, instead of implementing the recommendations of those reports.”

Recalling Dr Deshmukh as a man who knew the power of science, Professor said he was a person who tried to bridge the gap between scientific know-how and agricultural do-how. One of the key accomplishments of Dr Deshmukh during his tenure as Agri minister was that he organised the first World Agriculture Fair in 1959 in Delhi, which was inaugurated by then President of the United States Dwight Eisenhower and attended by then Premier of the Soviet Union Nikita Krushchev.

“Dr Deshmuklh brought prestige to agriculture through the World Agriculture Fair. Usually agriculture-related events were treated lightly as it had to do with poor farmers. But Dr Deshmukh ensured it was accorded utmost importance; he even brought down a Japanese-American architect to design the building in which the fair was held at Pragati Maidan,” recalled Professor Swaminathan.

The Fair had great scientific impact. There was symposiums held, and advanced concepts such as ‘Atoms on the Farm’ were exhibited, in association with the United States’ Atomic Energy Commission. The exhibition showcased the potential uses of atomic energy in developing new crop varieties, controlling pests and enhancing the field of food safety and storage.

Dr Deshmukh also collaborated with the United Nations’ Food and Agriculture Organisation (FAO), urged then Prime Minister Jawaharlal Nehru to build agricultural universities and himself founded the Shri Shivaji Educational Trust which now runs 24 senior colleges, 54junior colleges, 75 middle schools, and 35 hostels mainly in Vidarbha district of Maharashtra but also in other parts of the state. The state-run Dr Panjabrao Deshmukh Krishi Vidyapeeth is named after the illustrious son of Vidarbha who as agriculture minister paved the way to sustainable food security in the nation.