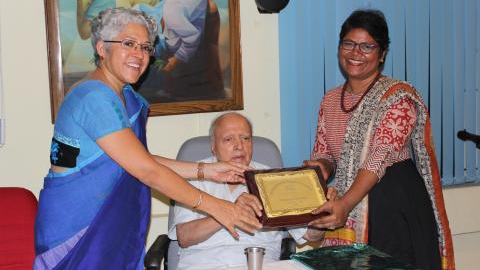 Chennai, September 1, 2018: There were tears of joy as well as sorrow as the staff of MSSRF said goodbye to Ms Nancy J Anabel, Director, Information Education and Communication, at a farewell organised in her honour at the Foundation. She leaves to take on greater responsibilities outside the Foundation.

A mentor, guide and friend to many who knew and worked under her, Ms Anabel used her soft skills and core skills over the past decade to uplift the rural masses that her programme area’s projects were designed for.

Prof Swaminathan, Founder, MSSRF, speaking on the occasion said “We are losing one of our most capable scientists, who combined science with spirituality”. Both science and spirituality are necessary in life; science gives us the method while spirituality gives the meaning to our work, said Prof Swaminathan.

Dr Madhura Swaminathan, Chairperson MSSRF said that over the past six months she had developed an intimate relationship with Ms Anabel. She commended Ms Anabel on working with ICT tools when no one else had done it as part of outreach to the remotest of populations. “The FFMA (Fisher-Friendly Mobile App) which Ms Nancy’s team had developed has reached over one lakh fishermen, which happens to be the most difficult community to reach,” she said. “The IEC motto is reaching the unreached and Nancy has done just that,” she added.

Dr Anil Kumar, Executive Director- in charge, MSSRF said that Ms Nancy had set an example for leadership, as she was more of a leader than a boss. “Very few people have that quality,” he said, adding, “The IEC programme area is the largest at the Foundation and the expertise she has built up especially with regard to the FFMA will definitely be further built up.”

Mr Nandakumar S, Head, Finance, MSSRF, praised Ms Nancy for her humility and simplicity, and said she was a great communicator. This thought was also echoed by Ms Vidhya S, Head, HR and Admin.

Ms Nancy thanked everyone for their warm words and spoke of how much she learnt from the nurturing environment of the Foundation, which was a “place of energy”. She thanked Prof Swaminathan for all his support and said, “He has been the Father of the Green Revolution, but he is also the father of the knowledge revolution and to me also he is like an appa”.

Many of her team members including Ms. Rojarani, Mr Srinivasan, Mr Kannappan and Ms. Priyanka all spoke highly of her and thanked her for her support and mentorship.