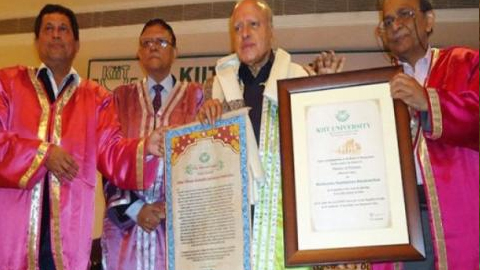 Kalinga Institution of Technology (KIIT) Odisha conferred Prof. M S Swaminathan with a Degree of Doctor of Science for his contribution towards helping farmers and tribal’s in the remote villages of India and development of sustainable agriculture through his scientific research.

Receiving the award from Achyuta Samanta, Founder, KIIT University, Prof. M S Swaminathan Said that genetic engineering is a valuable technology though it has a few corns as every other technology and the country must take necessary steps to use it effectively.

Citing the rich genetic biodiversity of Odisha , Prof. M S Swaminathan said that major share of the rice produced in our country is originating from Odisha. There are over 35,000 varieties of rice and many of them is vanishing now. “Though the Koraput village of Odisha was the first site included among the GIHS (Globally Identified Heritage Sites) the other one being Kuttanad, Kerala , we are not taking much efforts to  make agro-biodiversity spots like Koraput into ‘happy spots’ ” Prof. added.

Describing the State of Odisha as a ‘genetic paradise’, prof. Swaminathan stressed the need to break up the paradox, prosperity of nature and poverty of people existing in the State  which  had even intrigued leaders  like Mahatma Gandhi and  Jawaharlal Nehru. Efforts must be taken to preserve cultural and curative diversity of place like these said, Prof. M S Swaminathan.

A plant geneticist by training, Professor Swaminathan’s contributions to the agricultural renaissance of India have led to his being widely referred to as the scientific leader of the green revolution movement. His advocacy of sustainable agriculture leading to an ever-green revolution makes him an acknowledged world leader in the field of sustainable food security. KIIT University Doctorate is the 75th honorary degree received by Prof. M S Swaminathan.