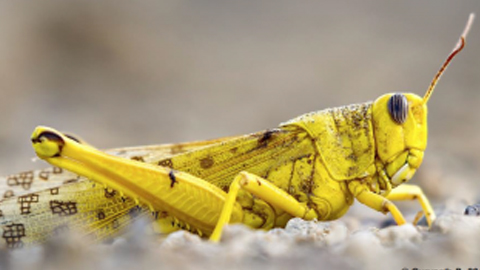 June 2020: Prevention is the absolute key and the government and community need to respond together, to address the locust attacks on farms, said the expert panel at the webinar on ‘Locust attacks: What India’s farming community needs to know’. The discussion was organized even as multiple queries and concerns were raised by farming communities across India due to unexpected locust swarms across western and northern parts of India. To provide scientific information MSSRF organized an online panel discussion with three speakers, Dr Belinda Luke, Senior Insect Pathologist and Team Leader Biopesticides, CAB International, Dr Jaba Jagdish, Scientist & Head Entomology, International Crops Research Institute for the Semi-Arid Tropics (ICRISAT) and Dr J S Kennedy, Dean, School of Post Graduate Studies, Tamil Nadu Agricultural University.

The experts also said that a larger range of approved control agents in India was needed. While suggesting links to climate change for the change in the swarm patterns, they also indicated that south India is likely to be spared but Delhi and UP were likely to be affected in the oncoming pathway of locusts. From July onwards, the breeding of desert locusts in India could affect the kharif season, they warned. Most of all, identifying the actual pest – the gregarious desert locust was crucial to avoild panic and rumours.

The discussions were moderated by Jayashree Balasubramanian, Director Communication, MSSRF and an overview on MSSRF’s role in food & nutrition security was provided by Dr G N Hariharan – Executive Director (i/c), MSSRF. Prof M S Swaminathan in his message on the issue he emphasized the need to manage the locusts using neem seed kernel extract. “The locust menace is causing serious damage to agriculture. Farmers are worried. The best way in controlling the locust invasion is to spray neem seed decoction over the plants. Neem is a strong repellent. Neem also serves as fertilizer. I hope our farmers will be able to manage the serious threat to crop security,” he said.

The discussion started with the panic surrounding the locust swarms as Dr Kennedy explained the need to not panic. Grasshoppers change behaviour as locusts through a phenomenon called phase variation, from solitary to gregarious phase. Locusts, unlike grasshoppers move fast, in swarms, are active during day time and have a wide host range. Normally breeding in three seasons, in India, summer is the only ideal season for locust breeding. The movement from one region to another is controlled by wind. In India, with the south west monsoon having set in, the wind movement is towards north-east. It is present in Rajasthan, parts of Punjab, Haryana, Madhya Pradesh and Maharashtra with possibility of movement to Delhi and Uttar Pradesh. He also said that locusts can be managed by chemical and biological methods. Right now, since there is no crop in the field, they may stay in trees and may come back as soon as the kharif crops sowing takes place. In south India, the locust attack had last happened in 1939 and movement this time to the south of the country, was remote.

Dr Luke shared her long experience in biopesticides for control of locusts. She explained that bioproducts particularly entomopathogenic green muscardine fungus, Metarhizium anisopliae are very effective but should be targeted on breeding sites to expose eggs and immature stages of the insect which are highly susceptible rather than adults, making it important for bio-inputs to be used before the locusts attain adult stage. She also pointed out that biologicals are slow to act, taking 7-10 days to kill the insect compared to chemicals which act in less than 24 hours.

Dr Jagdish appreciated the initiatives taken by Department of Agriculture, Nagpur and the Locusts Warning Organization, Jodhpur, Rajasthan. He re-confirmed that there is a very negligible possibility of the movement of locusts to south India due to unfavourable weather movement. He added that Malathion, Deltamethrin and Profenophos are effective in killing locusts. Since the efficacy of the infection of entomopathogenic fungus depends on high relative humidity, he said coastal belts and places where there is high relative humidity alone can support the use of Metarhizium sp. He also added that National Bureau of Agriculturally Important Insects, Bengaluru has mass multiplied specific isolates of Beauveria bassiana and supplied to Rajasthan. He said that it is high time that we need to orient the farmers to differentiate between locusts and ordinary grasshoppers and felt that it can be achieved through dissemination of vernacular technical materials, manuals, pamphlets etc. The reported occurrence of insects in Trivandrum in Kerala, Visakhapatnam in Andhra Pradesh and Krishnagiri in Tamil Nadu, were grasshoppers and not the desert locusts.

Dr Luke emphasized that early detection, regular monitoring are the best ways to manage the locusts in an effective manner. She added that creating smoke by burning is also effective. Dr Kennedy added that it was important to use fungus in breeding sites of locusts as it is done in manure pits to manage coconut rhinoceros beetle. He also pointed out that locusts prefer dry desert-like barren land or sandy soil for egg laying but need vegetation to grow. When dessert-like condition exists, they lay eggs at a10 cm depth and each brood has about 200 eggs. As currently there are no crops and the kharif season is delayed the locusts are temporarily settling down on perennial trees and feeding on them.

Dr Jagdish presented a few slides to differentiate between solitary and gregarious phase of male and female, while Dr Kennedy shared that while there are 500 species of grasshoppers, only 11 species can transfer to locusts. In India, only four species namely, desert locust, Bombay locust, gregarious migratory locust and tree locust attack the crops.

Moderating the discussions, Ms Jayashree requested panelists to state immediate actions to be taken by the government and the community. Dr Luke said take early detection and monitoring; Dr Jagdish requested farmers to do deep summer ploughing and expose the eggs to sunlight or predatory birds, digging trenches two feet depth around the field and spraying Quinalphos to kill crawling nymphs that fall into the trench, create sounds by beating the drum, radio. Dr Kennedy suggested that baits may be impregnated with insecticide, crops dusted with fine sand and washing crops with water. He also stressed for a community, rather than individual approach.

The webinar came to an end with a lively interactive session with participants.