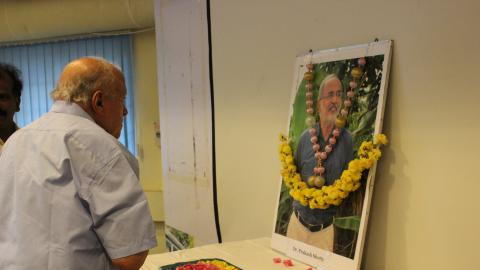 Chennai, September 6, 2018: A condolence meeting was held at MSSRF today, to remember and pay respects to Professor Prakash Shetty, CEO, LANSA, who passed away in London on Monday, September 3.

Professor P C Kesavan, Distinguished Fellow and Former Executive Director, MSSRF, recalled his long association with Dr Shetty; his wife Amiya and Dr Shetty were first cousins and had grown up together in a village near Manipal. He said Amiya fondly recalls that PS, younger to her by three years, would always support her whenever there was a dispute among siblings. “His joining MSSRF as CEO, LANSA gave them an opportunity to meet and recall their childhood days, whenever PS visited Chennai. They also discussed work at the Foundation and other matters,” Dr Kesavan said. He referred to Dr Shetty as a person with multifarious interests and recalled his discussions with him on different matters over breakfast at the Foundation, whenever the latter was in Chennai. They had also discussed cancer and what it portends.

Dr R V Bhavani, Programme Manager, LANSA gave a brief profile of Dr Shetty and his role as CEO, LANSA. She said that Dr Shetty had brought his vast experience in the field of public health nutrition into leading the LANSA research consortium and provided exemplary stewardship both through his intellectual contributions and as an administrator. “Working with him over the last six years has been a very enriching phase for me professionally; I consider myself fortunate for having got the opportunity and with his passing away, I have lost a mentor and friend,” she said.

An intellectual with a large heart, he was sensitive and endeared himself to everyone. He was a fighter and had come bouncing back after each bout of illness in his fight with cancer during his stint with LANSA. The deterioration in his health over the last few weeks had been very fast. His passing away was a loss to MSSRF and to LANSA. The LANSA Consortium Management Team had recorded its gratitude to him for his ‘fantastic leadership’.

Mr S Raju, Social Scientist, LANSA recalled how Dr Shetty put everyone at ease through his unassuming and friendly nature.  He expressed that he and other researchers under LANSA at MSSRF had greatly benefitted from his guidance and mentorship.

Professor M S Swaminathan, Founder MSSRF, recalled his first meeting with Dr Shetty, when he was working at FAO and remembered the then DG Jacque Diouf referring to Dr Shetty as an asset. He remembered Dr Shetty as a modest and unassuming person who took up the mantle of the LANSA programme and made a monumental contribution in steering it forward.

Prof Swaminathan said that he had thought of Dr Shetty the previous day on September 5, which is observed as Teacher’s Day in India. “Dr Shetty was an ideal moral teacher who cared for his students. We have much to learn from his humility, smiling nature, management values and leadership. We are fortunate to count him as a member of the MSSRF family and convey our condolences and prayer to his family to bear this irreparable loss. The important thing is to remember why he was admired and strive to imbibe those qualities,” Prof Swaminathan said.

The gathering observed two minutes silence as a mark of respect.