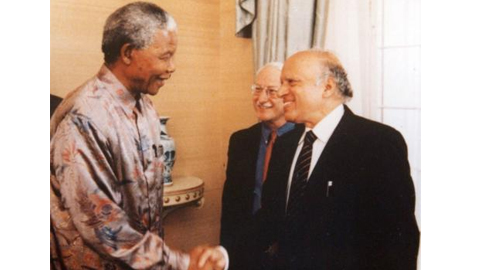 The life and contributions of Nelson Mandela are a source of inspiration to all of us. He followed the Gandhian method of non-violent – non-cooperation. He underwent great suffering including many years at the infamous Robben Island. When he came out of prison, many members of his African National Congress suggested to him an action which would have involved violence. He told them that the ballot is better than the bullet. What he said came true and when elections were announced, he could get the majority and Nelson Mandela became the first President of the post apartheid South Africa.

I went to South Africa in 1996 when Nelson Mandela had just become its President. The Ford Foundation had established its South Africa office in 1993. President Mandela wanted to show his appreciation of the Foundation’s work and he invited it to hold its Trustees meeting in Pretoria.  When I was there, I visited KwaZulu-Natal, called “the garden province”.

One important lesson I brought away from this visit is President Mandela had hosted a lunch for the Ford Foundation trustees and I found myself seated next to him, the media that day had published reports and articles which spoke of Mandela not contesting elections to regain his presidential post for the second term. Only one term and no more, he had said. I was a bit surprised by this and asked him why would he say this since he was such a well renowned national hero who had brought about the smooth transition from apartheid to democracy. I told him, “Sir, under these conditions you should remain for at least one more term.” And he replied, “Swaminathan, you know I am a hero today as you say, but if I have a second term, I will become a zero. My people have lot of aspirations which I can’t satisfy, they want land, they want jobs, and they want salaries. So, it is far better, therefore, that I stabilise the democratic tradition and leave it to my successor to build the country.” I keep remembering his words and think to myself, that kind of wisdom among political leaders will be very important to ensure for the democracy to survive.