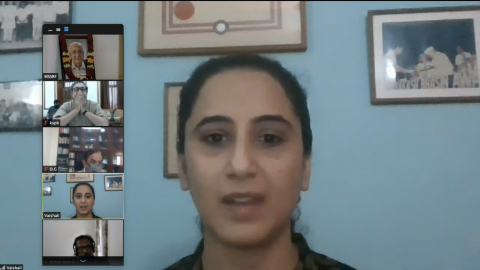 Memories and tributes poured in for Prof V L Chopra at a special memorial meeting held at MSSRF. Renowned agriculture scientist and former Director General of the Indian Council of Agricultural Research (ICAR), Prof Chopra was also a Founder-Trustee of MSSRF.

Speaking on the occasion, Prof M S Swaminathan shared his 50 years of association with him. “At IARI, Prof Chopra had a large number of students and they all admired him. He helped establish a fund for education from savings of the international congress of genetics with which many students were supported. Education, research, extension, public policy – these were important aims of his life,” he said. The Foundation was very fortunate to have him as Founder Trustee and except for the last few years, he had regularly visited MSSRF he said.

Prof V K Ramachandran, Vice-Chair Kerala State Planning Board and Founder-Trustee MSSRF, referred to Prof Chopra as an elder friend and co-trustee. “If India transformed from ship-to-mouth to a nation where enough food was produced it was due to application of science and technology and two generations of agriculture scientists at the forefront to which Prof V L Chopra belonged.” His keen interest in science was evident when he continued to have a lab and guide students even after he was DG ICAR. He also founded the Institute of Plant Biotechnology within IARI and the Institute of Genetics in Hanoi. This institution building made India’s national agricultural research system strongest system in the developing world in 1990s.

The Director General of ICAR and Secretary Department of Agriculture Research and Extension (DARE) Dr Trilochan Mohapatra said he was a teacher’s teacher. “Prof Chopra was my

guide, my philosopher; a father-like figure who taught me the fundamentals of genetics, and also taught me how to be a good human being. Humility personified, he had many human traits to imbibe and build in oneself. He inspired all the time providing guidance to move forward with a different dimension to relationships, so one would get emotionally attached to him.” Describing him as a visionary who saw things beyond his time Dr Mohapatra said, Prof Chopra had left his footprint wherever he had been. “If I am here, today, it is he who played a significant role shaping, supporting me in every sphere and situation which I cannot imagine,” he recalled.

Ms Vaishali Chopra spoke of how she had grown up listening about Prof Swaminathan as a very respected personality in her father’s life. “What struck me was the immense sense of respect for his teacher that remained with him all through. In fact he would even stand up while speaking to Prof Swaminathan on the telephone! Also, was his extreme passion for science when he was happiest and that was something he would joke about. We sisters also imbibed his honesty and to never compromise come what may. Although he was my idol in whatever he was doing, he encouraged us to do whatever we can excel in, not necessarily science.”

A few days before he passed away, he in fact penned an emotional email to Prof Swaminathan that was dictated to his daughters to remember his teacher. Speaking of his joint collaboration as a scientist and as faculty at Jawaharlal Nehru University, Prof P C Kesavan, former Executive Director and Distinguished Fellow at MSSRF, spoke of howProf Chopra and he used to have a jovial relationship. He also recalled how Prof Chopra had advocated precautionary principles since he had his rooting in genetic toxicology.

Prof T Jayaraman, Senior Fellow, Climate Change MSSRF spoke of how they had worked together on a committee for MSSRF and had interacted as an elder friend. He recalled that Prof Chopra made his point unambiguously always. His attitude was that science could go out and serve people it had delivered to the country, society and science in an outstanding manner.

Director of MSSRF’s Biotechnology program, Dr G N Hariharan said he first listened to Prof Chopra in 1991 in Lucknow at the Botanical Institute which gave him the idea of the emerging opportunities in the field. He was a person who would make us pursue science with caution, he said. Dr Madhura Swaminathan, Chairperson MSSRF conducted the proceedings and the tribute to Prof Chopra.

The video of the meeting can be accessed here:  https://youtu.be/vZq_9WcUP94