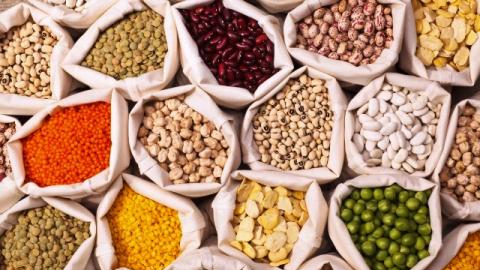 Pulses are the dried edible seeds of cultivated legumes and belong to the family of peas, beans and lentils. The protection of stored agricultural products against insect attack is essential for safe and steady supply of high quality food. Insect damage and pulses may amount to 10-40% of the stored grain.

Koraput is a tribal dominated district with a concentration of 50.6% of the district population. 68% are small and marginal farmers cultivating rice, millets, pulses, oil seeds in their traditional cropping system like multiple cropping, inter cropping, crop rotation. The pulses like garden peas, black gram, green gram, Pigeon pea, horse gram are cultivated by the farming communities both in Kharif and Rabi.

Farmers in villages of Jeypore of Koraput district, where MSSRF carries out field level work, stored these pulses in different traditional storage system like bamboo basket pasted with cowdung and red soil, simple used polythene bags, earthen pots where pulses seeds are smeared red soil paste. As per the farmer’s perception during base line survey, in the past these containers or storage systems are very helpful with reduced pest attack. However, in recent times, these storage systems were perceived as not being safe and there was increased pest attack during storage.

In these villages green gram, red gram and black gram are cultivated in large scale in an average area of 387 acres both in Rabi and Kharif through the Indo-Morocco IMFLI project which were implemented from the year 2012. During village committee meeting and focus group discussions, the problem of storage pest attack was raised by the farming communities.

Then the problem was discussed with project coordinator, project leader and experts in ICRISAT by MSSRF to find solutions to the issue raised by farming communities. Understanding the ICRISAT model of triple layer polythene bag for safe storage of pulses along with a visit to their pulse storage banks helped acquire practical knowledge and practice followed by farming communities in those areas.

The method involved three 80 -100 micron polythene bags inserted one into another with a capacity of 70-80kg pulse seed or grain storage. Once the fully sun dried pulses were placed in the bag, the first layer was bend like a “U” shape and tightened with a rubber band. The second and third layer are tightened and bound accordingly. The bag is neither stitched with a needle and thread nor is there loose binding of the polythene bags. After proper storage and binding the seeds would be kept in a dark place.

Initially 100 bags were brought from ICRISAT and distributed with proper demonstration in 2015. After nine months of storage of pulses seeds in the triple layer bag there was no infestation seen in seed materials. Farming communities are now very happy and requesting to supply more bag and they are ready to pay from their village fund or individually.

The institution to institution extension services worked very well. It reduces seed dependency on the government and can bring in additional income through sales if required. It also opens a window to a quality pulses bank at village level or cluster level establishing a farmer federation. This MSSRF initiative is a new experience for farming community of Koraput district giving a much needed thrust to enhanced pulses availability, in the International Year of Pulses.