Sharing experiences and learnings from project on public libraries 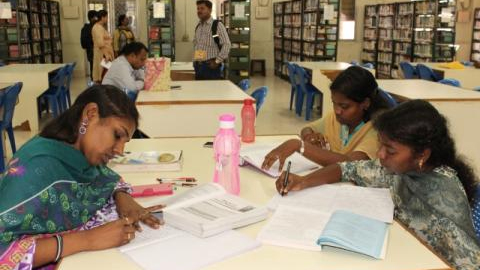 The International Network of Emerging Library Innovators (INELI), Indian Public Library Movement (IPLM) and MSSRF are organising their first Regional Public Library Conference on July 17, 2018, at MSSRF.  A delegation from the government of Tamil Nadu, the Minister of Education, the Director of Public Libraries and School Education and the Principal Secretary of School Education will participate in the inaugural function.

The purpose of this conference is to share the learnings and experiences and discuss and present challenges with key recommendation for policy advocacy in the field of public libraries. This is being implemented under the project of Repositioning and Strengthening Public Libraries as Knowledge Centres in India. MSSRF is the organising partner to the Indian Public Library Movement (IPLM) and the NASSCOM Foundation.

M S Swaminathan Research Foundation (MSSRF) had pioneered and demonstrated the concept of “Village Knowledge Centre” catalyzing a shift in providing need-based information and created advancements using science and technology in rural development. Two decades of learnings and experiences of providing real time access to information with the rural communities are now being demonstrated in public libraries. The Indian Public Library as a movement (IPLM) is building the capacities of the librarians who are demonstrating diverse knowledge services in response to the community needs through their libraries for building socially inclusive Knowledge Learning Centers.

The story of the transformation of both libraries and librarians began with the MSSRF spearheading International Network of Emerging Library Innovators (INELI) India and South Asia initiative in 2015. INELI India built the leadership and innovative knowledge and abilities of the public librarians known as INELI Innovators. The IPLM complements librarians’ ability to directly demonstrate and implement community-based and ICT relevant interventions through their libraries. IPLM envisions public libraries as an enabling environment with multi-stakeholder partnership, integrating ICTs to demonstrate scalable model for meeting the needs of the community. With 61 public librarians from 22 States across India, the INELI program is passionately taking a lead as a change maker in support of IPLM’s larger vision and agenda to place public libraries as key knowledge institution to address the wide spread information poverty in the country using technology to bridge the gap between have’s and have not’s.

The blending in of both INELI and IPLM as an investment in India is primarily to demonstrate and create a shift in the role of libraries beyond books. For close to a year, a notable shift was observed in public librarians across India, having initiated diverse community services under thematic areas in the field of agriculture, health and nutrition, education, women empowerment, environment, culture and heritage and are reaching the unreached.

In this background, a Regional Public Library Conference (RPLC) is a one day event being organized by MSSRF to share, learn, discuss on challenges and capture key recommendations in redefining the role of public libraries for building inclusive communities, by integrating National and State Priorities that are aligned with the UN Agenda 2030. In addition, the programme will explore scope for scaling up of model libraries in Southern States (Tamil Nadu, Kerala, Lakshadweep, and Andaman and Nicobar) of India. The RPLC will bring together key stakeholders from the southern states including Principle Secretaries, Directors from Department of Public Libraries, District Library Officers, Public Librarians, and representatives from IPLM and its partners, NGOs, SMART cities officers, CSRs, and academic institutions.

The Indian Public Library Movement (IPLM), supported by the Bill & Melinda Gates Foundation’s (BMGF) Global Libraries initiative and hosted by NASSCOM Foundation, is a multi-stakeholder initiative for the transformation of Public Libraries into new age knowledge centers. IPLM started as a pilot in 2012 when select number of public libraries were undertaken in Uttar Pradesh and Bihar to transform these institutions into model libraries. Based on the learnings of the pilot phase, the scale up phase of IPLM was started in November 2015 to ‘reposition and transform public libraries into vibrant and inclusive spaces for knowledge acquisition, engagement and sharing’.

MSSRF spearheads the INELI India & South Asia e-learning leadership program designed specifically for public librarians and is supported by the BMGF. The INELI model adapted from the INELI Global Libraries Initiative of the BMGF, is for building a network of library leaders to foster collaboration, support one another, identify best practices and create efficient libraries as community-oriented knowledge and learning centres.

The INELI programme, spread over 20 months will build the capacity of public librarians to develop their knowledge, attitude, and skills for enhancing their leadership qualities through a variety of online and offline learning environments and networking events. Those librarians who enrolled in the course are popularly known as INELI Innovators.