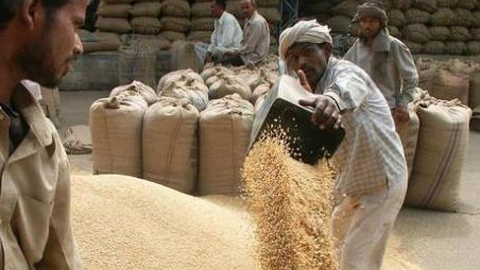 Two days ago, the Finance Minister Nirmala Sitharaman announced a ₹1.7-lakh crore package of social security measures to deal with the COVID-19 pandemic in the period of the 21-day lockdown. In respect of food security, the package falls far short of what is needed. I argue that we need to immediately ensure universal rationing with an expanded food basket, and special measures for cooked food in urban areas for the vulnerable population.

The burden of the current lockdown is borne disproportionately by the large unorganised workforce, comprising hundreds of millions of casual daily wage-workers and self-employed workers. India already holds the record for the largest number of malnourished persons in the world. As their ability to purchase food diminishes, a growing population of working people and their families will soon enter a phase of hunger and undernourishment. The answer to this looming and very real scenario of food insecurity lies in a massive programme of food rationing, far greater than what the Finance Minister has promised.

To ensure that all people have access to adequate food in the midst of this unprecedented health and economic crisis with potentially high levels of mortality, we must immediately expand our food security system. Before I come to the components of such an expanded programme, let us briefly look at the lessons provided by the experience of other countries in using rationing in times of scarcity.

In the United Kingdom in the 1940s, rationing or a policy of “fair shares” was introduced in a period of war and scarcity. Starting in 1939, each and every person was issued a ration book, with a weekly entitlement that could be collected at a local grocery store. Rationing encompassed many commodities, starting with butter, bacon and sugar, and later augmented by eggs, biscuits, tinned food, meat, cereals, etc. A remarkable outcome of the war years was, as Amartya Sen has demonstrated, a significant improvement in vital statistics including a rise in life expectancy and a decline in the mortality rate. Despite heavy war casualties and a decline in consumer expenditure per capita, life expectancy actually improved. In the first six decades of the 20th century, the decade from 1941 to 1950 saw the largest increase in life expectancy in England and Wales.

In India, the British introduced rationing in six cities in 1942, mainly to supply industrial workers with adequate food. Following demands from a strong political movement, Malabar became the first rural area to implement rationing in 1943. In the mid-1960s, the system of rationing or the Public Distribution System (PDS) was made a national universal programme, which steadily expanded till 1991. In the 1990s, the policies of liberalisation led to the withdrawal of universal rationing and its replacement by a policy of narrow targeting. Differential entitlements were provided for BPL (Below Poverty Line) and APL (Above Poverty Line) households. In 2013, the landmark National Food Security Act (NFSA), ensured legal entitlement to rations and other food-based schemes (such as mid-day meals in schools). Around 75% of rural households, and 50% of urban households, that is, a total of two-thirds of all households, were eligible for inclusion (now termed priority households) in the NFSA.

The implementation of the NFSA — notably the PDS, the Mid-day Meal Scheme, and the Integrated Child Development Services scheme — varies significantly across States; nevertheless, the infrastructure for distribution of food is in place in all parts of the country.

In China, the National Development and Reform Commission (NDRC), a planning body, was the key coordinator along with the Ministry of Commerce (MOFCOM) in ensuring supplies of basic foods and price stability to the poor, especially in Wuhan province, the epicentre of the current pandemic, which was under lockdown since January 23, 2020.

The Chinese strategy had multiple components, which included public corporations and ministries, 300 large private companies, 200,000 private stores, and local government institutions. To illustrate, State-owned companies such as COFCO or the China National Cereals, Oils and Foodstuffs Corporation, and Sinograin (China Grain Reserves Corporation) supplied key commodities to Wuhan. This included 200 tonnes of rice, 50 tonnes of flour and noodles, and 300 tonnes of edible oils each day during the peak of the pandemic in February 2020. The National Grain Trade Centre has to date supplied 155,000 tonnes of corn and 154,000 tonnes of soyabean to Wuhan. Special delivery trucks for transport of vegetables were arranged, and the local government organised open-air markets.

Kerala was the first State in India to announce a package with income support measures and in-kind measures including free rations of 15 kg (grain) and provision of cheap meals. The government of Tamil Nadu announced free rations of rice, sugar, cooking oil and dal to all ration card holders. The supply of rations for unorganised workers is to be through Amma canteens. The Delhi government will give 1.5 times existing entitlements at no cost to all ration card holders.

Key points of a plan

In India a system of expanded rations must have the following components. First, for all rural households, free rations of rice and wheat at double the normal entitlement must be distributed. The current entitlement is about half the quantity of daily cereal intake recommended by the Indian Council of Medical Research: the new quantities should be the actual minimum requirement per person per day. The government of India has now doubled rations (rice or wheat) to all priority households, from 5 kg to 10 kg per person per month. However, this falls short, as the rations are not to all households but only priority households; the rations are not free (only the additional 5 kg is free).

The provision of rations must be universal: this is not the time to demarcate households by type of ration card or whether they have a ration card or by any form of biometrics. The system of identification of priority households is not error-proof, and no household wrongly excluded should be outside the ambit of rationing today. This upscaling is feasible as the country has stocks of 58 million tonnes of rice and wheat; and the wheat harvest is currently underway in north India.

Coronavirus | Kerala to provide free ration to all

Second, for all rural households, additional rations of cooking oil, sugar, salt and lentils should be provided on a regular basis. Soap must also be included in this list. As supplies have to be arranged, the distribution could be weekly or fortnightly in order to ensure smooth availability. It is good to see that the government of India has announced one kg of dal per household, but it needs to provide more commodities quickly.

Third, if milk, eggs and vegetables (or one or more of them) can be supplied, we can not only ensure basic food security at the time of a major health crisis, but actually address our burden of malnutrition.

For urban areas, we need a combination of provision of dry goods and of cooked food. All households with ration cards can be given the same entitlements as proposed for rural households.

Coronavirus | Madhya Pradesh govt. to give BPL families free ration for a month

For the vast numbers of workers and migrants in towns and cities, however, we must set up arrangements for preparation and delivery of cooked food. The large numbers of closed community kitchens (schools and colleges, company and office canteens, for example) and restaurant workers now sitting idle or laid off can be brought together to undertake a massive programme of provision of cooked meals at subsidised rates. Kerala has taken the lead here. This will require careful planning and technology to distribute food while ensuring physical distancing. The answer is not to simply close the Indira Canteens (serving low-cost meals) as Karnataka has done.

All the measures proposed must continue for at least three months, and be reviewed afterwards.

An imaginative massive exercise of expanded rations could not only provide succour in this pandemic but also bring in a policy shift that will help sustain a nourished and healthy population.