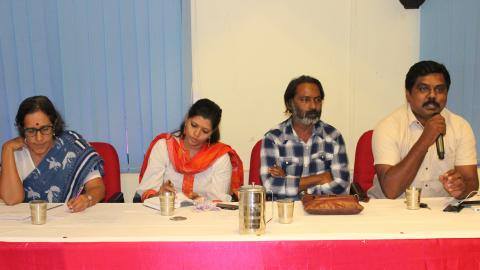 Chennai, June 04, 2019: As part of commemorating the ‘World Environment Day’ a documentary film titled ‘Suryaganga’ directed by Ms Valli Bindana that talks about water, energy and climate was screened at MSSRF premises today. After the screening a discussion took place with the review of the film. The film evidenced the negative impacts due to the hydroelectric project at Uttarakhand which has affected the lives of so many villagers who are dependent on the River Ganga for their livelihood, then the film also shows the environmental degradation that is caused due to the improper way of running a thermal power station and coal mining which also affects many people. The film ends with a clear point stating that clean energy through Wind mills or Solar panels is the only way that we can save the environment and the nature for the survival of so many living organisms and species that even include human beings.

Prof M S Swaminathan delivered the presidential address at the event and he recalled that the World Environment Day which we commemorate today was born during the Stockholm Conference in the year 1974. Quoting Buddha, he said that the only way to stop human beings destroying the environment is to follow the environmental rule that is unilateral love, “healthy environment requires symbiosis and synergy, even if you do not have the love for the other person, you need to love the environment, even a cut tree provides shade including to the person who cut it, the idea of unilateral love towards nature is important”. “Air pollution can be controlled only through a combination of technology, public policy and people’s cooperation. We are experiencing every year severe air pollution in North India because of the burning of the rice straw. This is unfortunate because rice straw can be a source of income and employment. Rice straw can be enriched with urea and molasses and used as animal feed”, said Prof M S Swaminathan.

Environmentalist Mr Sundarrajan from Poovulagin Nanbargal said “before we could talk about producing clean energy, we need to talk about energy justice”. He pinpointed that the malls in the cities consume huge energy per hour that would power up a whole village for a month. He says that Chennai alone consumes 30 to 40% of the energy that the whole Tamil Nadu consumes. “The next 10 to 15 years will decide whether human existence would be there in future” he said. He commented that the content of issue that is filmed in Suryaganga is just a dot and there are lot of environmental issues that needs to be taken to the people through films and the art form is the best way to communicate.

Mr Ajayan Bala, Fim Director and Writer who participated in the discussion said that there are lot of local environmental issues that has to be filmed and taken to the people, in particular about degradation of Pallikaranai wetland and the history of the Coovum River. He also said that he will be doing a photo feature on river Coovum this year. On reviewing the film he said that the Director has made the film in a different approach that the answer is given by the same person from where the question arises, and the docu-drama was well presented in an artistic way.

Ms Kavitha Muralidharan, Senior Journalist said that the film is made in a very positive manner unlike many documentaries it says the issue and also gives the solution for the issue and appreciated for the gender perspective, for voicing the women farmer. Dr R V Bhavani, the Director of Agriculture-Nutrition-Health Programme at MSSRF chaired the session and said that we talk much about economic development and this film shows the ground reality of how we are furthering the water scarcity that affects the agriculture in many villages.