Training on diesel engine troubleshooting to fisherfolks in Puducherry 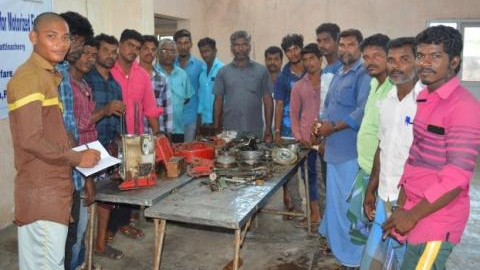 The small craft fisherfolk across India face a volley of issues while venturing into the sea for fishing. One of the major problems is the failure of their boat engine during a fishing trip. This could result in the fisherfolk drifting in the sea for days without any food and water. In some cases, this has resulted in deaths due to drifting for long periods without any help. Lack of awareness and knowledge on basic engine maintenance, many a times, has ended up with the engines of the boats getting ruined. Apart from expenditure to rectify it, there is also an opportunity cost resulting in fisherfolk not venturing into sea till the engine is rectified. Moreover, there is a lack of skilled and trained mechanics who can identify and resolve the issues, thus making the fisherfolks to depend on technical support from far away areas which also burn their pockets.

Taking into consideration the gravity of above said issue based on livelihood assessment study conducted by MSSRF under Fisheries Management and Sustainable Livelihood Programme (FIMSUL II) in the union territory of Puducherry, a hands-on-training on maintenance and repair of outboard diesel engines installed in motorized boats was provided to fisherfolks in Karaikal and Puducherry Districts.

Two workshops were conducted, one in each District, totally covering four villages including T.R Pattinam, Nallavadu North, Nallavadu South and Pudukuppam. Each training programme was for a period of three days covering both theoretical and practical mechanism aspects of operating diesel engine and its trouble shooting techniques. The participants were chosen carefully with the support of Traditional Panchayat, and also taking into consideration their interest, age, qualification and the possession of an outboard engine.

The first event was held at T.R. Pattinam village, Karaikal between 23rd and 25th April, where a total of 25 youth participated in the programme. Mr. S.R. Nagendhiran (The Indian Coast Guard, Commandant), Mr. M. Rajasekar (Inspector of Fisheries, Karaikal) , Traditional Panchayat leaders Mr. R. Selvaraj, Mr. R. Iyyapapan and  Mr. S. Muthumani and Dr S.Velvizhi  (Head, Fish for all Research and Training Centre, MSSRF, Poompuhar) were a part of the inaugural event.  The Deputy Director, Fisheries Mr. R. Kaviyarasan participated in the valedictory function of the programme and received the feedback from the trainees. The second training event was conducted in Nallavadu South village in Pondicherry between 4th and 6th May, where 20 fishermen participated in the programme. Dr. S. Velvizhi, MSSRF, Mr. M. Arumugam (Traditional Panchayat Member), Mr. K. Arumugam (Fishermen Society President) attended the inaugural function of the event and delivered an orientation to the fisherfolks on the importance of the training. The valedictory function saw the participation of Mr. K. Deivasigamani (Joint Director of Fisheries, Puducherry), Mr. S. Dhanasekaran (Deputy Director of Fisheries, Puducherry), Ms. N. Shajima (Assistant Director of Fisheries, Puducherry), Mr. A. Viswanathan (Fishermen Cooperative Society President, Nallavadu North). The officials had an interactive session with the trainees along with a feedback session. The participants put forth their thoughts and spoke on how useful the programme was to them. Most of the participants requested for an extended week long training programme.

To assess the knowledge gained through the training, a pre and post assessment test was held during the training programmes using a questionnaire. The results of the assessment showed that the training brought significant changes in the fisherfolks’ capacity in terms of confidence due to acquiring new knowledge and skills, safety while fishing and securing their lives, thus resulting in improved fishing practices and economic status to an extent and generating an interest among small scale fisherfolks to practice deep sea fishing for effective management of their livelihood.

Aravind. R, a participant of the training programme and many others who were part of the training said that this event has helped them gain confidence to set sail in self-reliance due to the newfound knowledge and skill. The Fish for All Centre of MSSRF strives to build capacity and confidence amongst the coastal communities through programmes like these.