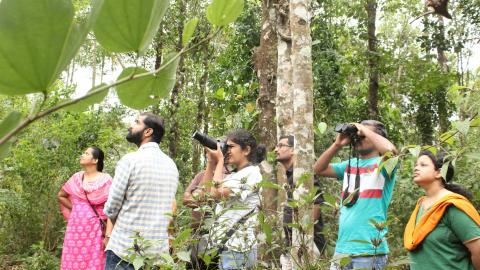 Wayanad, December 1, 2017: For the small group of media professionals, an early morning walk in a 10 ha Botanical Garden, listening to sounds of birds was just one of the activities at the three-day media workshop on “Bringing Biodiversity into the Media Space”. The workshop, organized by M S Swaminathan Research Foundation with the National Biodiversity Authority, aimed to bring greater awareness of biodiversity concerns among journalists.

Dr Madhura Swaminathan, Economist and Chairperson of MSSRF who spoke on the concluding day, brought up the importance of economics of farming along with biodiversity discussions. “We must not romanticize the small farmer’s role in terms of being more organic or bringing in more crop diversity. Instead we must focus first on how to support them better for greater income,” she said.

Dr Madhura pointed out that in agriculture, aspects of biodiversity or climate change impacts could be addressed only when income issues were sorted out. Giving details of a study on small farmers, conducted across 9 states in India, Dr Madhura said only 2% of small farmers actually got crop insurance. Small farmers are key communities who preserve agricultural biodiversity, but they first need financial support. MSSRF was supporting conservation by farmers as well as better practices and incomes.

Speaking on the occasion, Dr Saleem Khan, Senior Scientist, Climate Change, MSSRF, spoke of the need for media to communicate climate change risks especially with regard to coastal biodiversity. “Sea-level rise is a major threat of changing climate. It has adverse impact on ecosystems, biodiversity and dependent human communities of the coast,” he said. He spoke of need for more research of the Kerala coast and its potential impact due to climate change since there were only limited studies on this.

A brief mapping of news related to biodiversity in two English and two Malayalam newspapers done by MSSRF was presented on the occasion by Ms Ninu Mehnaz and Ms Aparna Narayanan. The study suggested that while media was covering various aspects of biodiversity, the term itself was not used in most cases, though related words were used. Workshop participants pointed out that people need simple information without jargon.

The workshop included field visits to a tribal hamlet, sacred groves and exploration of biodiversity flora and fauna. It also had a guided tour of the M S Swaminathan Botanical Garden (MSSBG), which is a lead garden for Rare, Endemic and Threatened species by the Ministry of Environment and Forests. A valedictory function to award certificates to journalists was held in which the MSSBG Advisory Committee and senior MSSRF staff participated. Further workshops on biodiversity will be held to keep up these discussions.