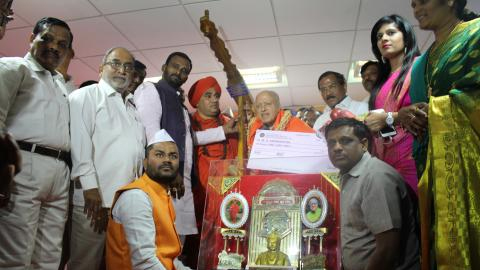 Minister Pandiarajan pitches for Bharat Ratna for the agriculture scientist

Shri Basava Jayamruthyunjaya Swamiji, spoke of the importance of farmers and said that while different religions had their own sacred texts, for farmers, the sacred text was the Swaminathan Commission Report. This was the way the farmers had been persistently quoting from and depending on these reports, he said.

In his acceptance speech, Prof Swaminathan welcomed the fact that farmers from different states were at the function. “A farmer is a farmer,” he said, no matter, where they are from. He emphasized that the monsoon and the market were the most important aspects in farming. “Assured market and remunerative pricing are crucial for the lives and livelihood of farmers.”

The award recognizes the contributions made by revolutionary individuals for development of agriculture, welfare of farmers and protection of natural resources.  In earlier years, the award has been conferred on Dr.Rajendra Singh (2012) for Water Resource Conservation, Gandhian Sri. Anna Hazare (2013) for his contribution to Rural Development and Organizing farmers, Smt. Medha Patkar (2014) in recognition of her contributions to the Save Narmada Campaign, Dr.Baba Adave (2015) for creating awareness among labour and coolies and Sri. Manik Sarkar, Hon’ble Chief Minister of Tripura (2016-17) for contribution to the pro-poor, rural and agriculture development.