“The Ethics and Politics of Science”- Book Release 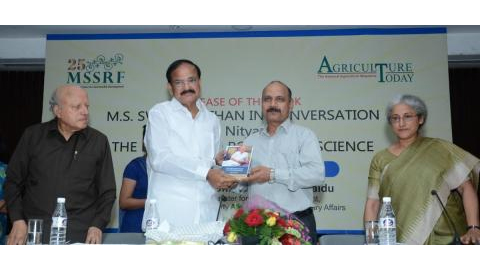 “M S Swaminathan, in conversation with Nitya Rao – The Ethics and Politics of Science” explores the inter-relationship between science, humanity and policy through conversations between Professor M S Swaminathan and his daughter Dr Nitya Rao (Professor of Gender and Development, University of East Anglia, UK) in May 2014. Shri Venkaiah Naidu, Hon’ble Union Minster will be releasing this book at the India International Centre, New Delhi on 10th September 2014 at 6.30pm. This book is in continuation of the earlier book released in August 2013.

The book traces the journey of India, from ship-to-mouth to achieving self-sufficiency in food production and passing of the India’s Food Security Bill that gives legal right for access to food. The book touches upon from the practical experience of Prof. Swaminathan various pathways of politics and economics of seeds; social, demographic and gender dimensions of science and technology, changes in agricultural research strategies to scientific temper and shaping public policy. Introspective, reminiscent, analytical and also historical – the book offers an insight into the core philosophy, thoughts and ideals that shaped the scientific and humanitarian journey of Professor M S Swaminathan.

Talking about the struggle of the early 1960s, with the threat of famine looming, Professor Swaminathan recalls the numerous trips and persuasive efforts required to enlist farmers into utilizing new quality seeds and others who supported these initiatives in the book. He opines “whether it was a student, a scientist, or a research assistant, it didn’t matter. It was what I called a symphony, everybody had a role to play and they all came forward together and put their heart and soul into the work. Today when I look back, I don’t know how it happened, but the fact remains that the success was because of the enormous enthusiasm of scientists and farmers, of students and staff.”

Professor Swaminathan goes on to say “What we need is leadership at two levels, scientific leadership and political leadership supportive of science… We too need a positive attitude, the self-confidence and determination to confront the challenges facing us today.”

Focusing on strengthening public sector research Professor Swaminathan emphasises that “Rather than imitating the private sector, there should be a clear agenda for public good research, an agenda for small farmers, which identifies the challenges they face and responds to it. This social and ethical dimension should be ingrained in public good research. Unfortunately, this is by and large missing today.”

In the book Professor Swaminathan also emphasises greater role and participation for women. He points out “The prejudice that women can work less because they have responsibilities at home persists across institutions. As a geneticist, I see no inherent differences between men and women; it is the opportunity and encouragement that makes the difference.”

The book presents a rare and deep insight into one of the greatest minds of the era – of a person referred to after Gandhi and Tagore as one of the 3 most influential Indians of the 20th Century – and is a must-read for the loftiness of thought and vision that are articulated here.