Water availability is not the problem in India, water management is: Nitin Gadkari 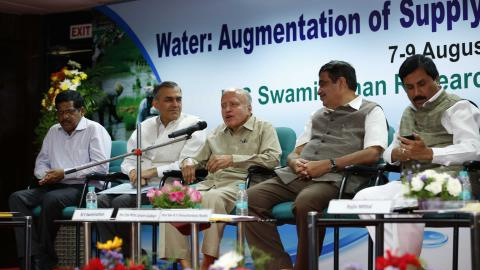 Chennai, August 7, 2018: “Water (availability) is not the problem, water management is the problem,” said Shri. Nitin Jairam Gadkari, Hon’ble Minister for Water Resources, River Development & Ganga Rejuvenation and Road Transport & Highways, and Shipping, Government of India, delivering the inaugural address at the International Consultation on Water held at M S Swaminathan Research Foundation on August 7, 2018. Stating that the water problem is only present in certain states, he said that in water conservation projects, the geology of the area should be taken into account.”

The minister threw the spotlight on three main ways of conserving water— recycling, desalination, and storing water that would otherwise drain into the sea. In the case of recycling, water from the sugar, paper and tannery industries can be recycled and used for power generation and agricultural use. He also pointed out there was a need to diversify cropping patterns by moving away from water guzzling crops such as sugarcane, rice and wheat and focusing on oilseeds as currently India imports around 70% of oil seeds, whereas the country produces excess of foodgrains. “The government should take into account the global scenario while framing national policies,” he said.

Mr. Rajiv Mittal, Managing Director and Group CEO, VA Tech Wabag Ltd, said a ‘composite water model’ was required. He highlighted how financing for water was not as forthcoming as in the infrastructure sector, and there needs to be ‘disruptive solutions’ to water same as in the road industry. He emphasized how we need to find alternative sources of water, such as desalination, to meet the demand and supply gap. “Chennai is a good example of desalination, with 20-25% of water needs being met through desalinated water,” said Mr Mittal.

Dr. Harsh Kumar Bhanwala, Chairman, NABARD, delivering the keynote address said, “Water is critical to life and sustainability is contingent upon meeting the growing demand for water.” He insisted that there should be a ‘people’s movement’ for water rather than a government initiative and that more institutions should be devoted to this cause. As the investment for water is so large, he called for the participation of the private sector in addition to the government. He also called for the inter-linking of rivers to ensure water availability throughout the year. He asked for setting up of a water infomatics centre to analyse water data for policies, with the Centre’s and States’ help.

Shri. N.H. Shivashankara Reddy Hon’ble Minister for Agriculture Government of Karnataka, delivering the special address, thanked Prof Swaminathan for his long guidance to the farming community as well as the government in Karnataka. As Karnataka is a dry-land area, he recommeneded that traditional rice like kagga that can grow in saline water be cultivated. He said his government had given emphasis to rainwater harvesting. “Under the Krishi Bhagya scheme, we have constructed 2 lakh farm ponds in the State”, which come of help in meeting irrigation needs, said the minister.

Prof. M.S. Swaminathan, Founder Chairman, MSSRF, said water as a resource was not valued as it should be. “The states must come together with a win-win solution for everyone”, which can also feed into the Water Security Act. “Water was a community asset, but it has now become commercial. In this process, the public should not be forsaken,” Prof Swaminathan said. He pointed to local initiatives such as the Kudimaramathu schme in Tamil Nadu and the Pani panchayat in Maharashtra that helped conserve water and these schemes need to be revitalised, he said.

Dr. V. Selvam, Executive Director, MSSRF made a presentation on the 28th annual report of MSSRF and highlighted the achievements of the Foundation over the past year. Shri. Nitin Jairam Gadkari, released the 28th Annual report of the Foundation on the occasion. Dr R Rengalakshmi, Director, Ecotechnology, MSSRF proposed the vote of thanks and said the deliberations from the three-day meeting would be brought out as a comprehensive action plan for water security. Dr. Madhura Swaminathan, Chairperson, MSSRF, participated in the inaugural session, which was well attended by scientists, researchers, and scholars.