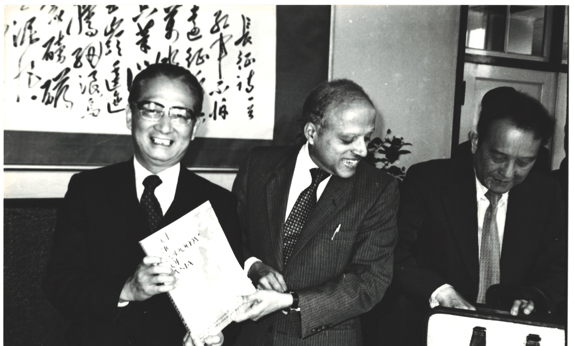 FARMING IN COMMUNES A HOUSEHOLD RESPONSIBILITY SYSTEM IN CHINA

My very first visit to China was when I was at the IRRI in 1982. I had detailed discussions with the Vice Premier Wan Li, Agriculture Minister He Kang, and Science Minister Song Jian, Director of the State Science and Technology Commission (now called Ministry of Science).

They explained to me the new agriculture policies of China, where farming in communes was changed to a household responsibility system. Earlier the government had stipulated quotas of grain to be produced.  In the early 1980s, farmers were given drastically reduced quotas. What food they grew beyond the quota was sold in the free market at unregulated prices.This was a major reform as the farmers were able to personally benefit financially from their own crops. It made a lot of difference to the economy as productivity and food supplies increased.

Vice Premier Wan Li discussed at length about household responsibilities in relation to our Indian approach to cooperatives in the dairy sector. I remember he wanted the help of Dr Kurien and NDDB to improve milk production. He said rice and milk were their priorities. Dr. Kurien did go and advise them.

They also had a dual policy, farm and non-farm. Farm was the agricultural sector; non-farm was the rural township enterprise. So there wasn’t anything called landless labour, either you had a job in the farm sector or a job in the non-farm sector. In fact, we had pointed out based on this learning, the need to develop dynamic non-farm employment initiative, based on farm products, in the NCF report.

The Chinese had the largest production of rice at 30 million hectares but productivity was not very high at the time I went there in the 1980s. I helped to set up a rice research institute with IRRI collaboration.  I developed a blueprint, got it approved by He Kang and got some money from the World Bank, UNDP and so on. The China National Rice Research Institute (CNRRI) was set up at Hangzhou. It is doing very well. There is still a small plaque put up in Chinese, which thanks me for setting up this institution.

Similarly, a China Hybrid Rice Institute was established at Changsha in Hunan Island. They were the first to produce hybrid rice. Yuan Longping was responsible for the development and large-scale adoption of hybrid rice technology. I also set up a Gene Bankin Beijing, because China has nearly 40000 varieties of rice, but they had not been conserved properly. This was funded by the Rockefeller Foundation and we sent T. T. Chang who was incharge of the IRRI Gene Bank to help develop a plan for the Chinese Gene Bank, which is one of the best in the world today. All of these gave a big push to Chinese agriculture. China increased its production very fast.