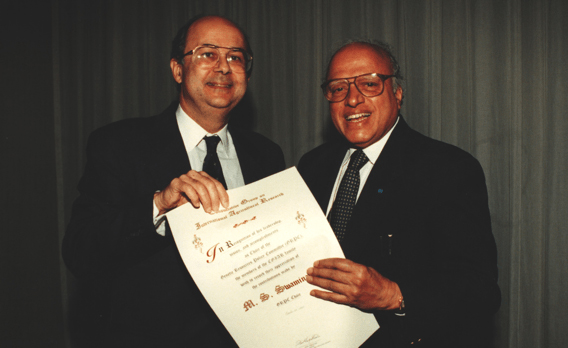 STRONG COLLABORATION IN THE FIELDS OF RICE, LONG-STAPLE COTTON AND WATER MANAGEMENT TECHNIQUES

I first went to Egypt in 1970 at the instance of the Government of India, leading a small delegation. I then paid a courtesy visit to President Anwar Sadat. Over the years, we have developed a strong India-Egypt collaboration, particularly in the fields of rice and long-staple cotton as well as in water management techniques for a large variety of crops. One thing which impressed me in Egypt was the agriculture museum. After seeing it, I thought we should have a similar museum in India where the entire history — origin and growth — of agriculture is depicted. Fortunately, that kind of museum was later established in New Delhi at the campus of the National Academy of Agricultural Sciences (NAAS).

The next time I visited Egypt was when I was DG of IRRI. President Mubarak told me that IRRI should help them to set up a rice research institute because there was enough opportunity to grow rice along the Nile valley. Although, funding was a problem, I succeeded in getting help from the US Ambassador, who agreed that if his country helped Egypt in growing rice it would go down better with the people instead of just being known as suppliers of arms and ammunition. In 1987, the Rice Research and Training Center (RRTC) started functioning at Sakha in the Nile valley, with strong support from IRRI and USAID.  I had appointed Dr EA Siddiq as the head of the programme, and he along with our Indian colleagues who went with him, did a great job. Today it is going strong, with a full range of well-equipped research facilities.

My friend Dr Ismail Serageldin, who was the Vice President of the World Bank and Chairman of CGIAR, was instrumental in reviving the famous library at Alexandria that had dated back to centuries ago. With support from President Mubarak and from UNESCO, the Bibliotheca Alexandrina was set up in 2002 in the same area near the Mediterranean Sea. He asked me to be one of the founding trustees. It was a great honour.