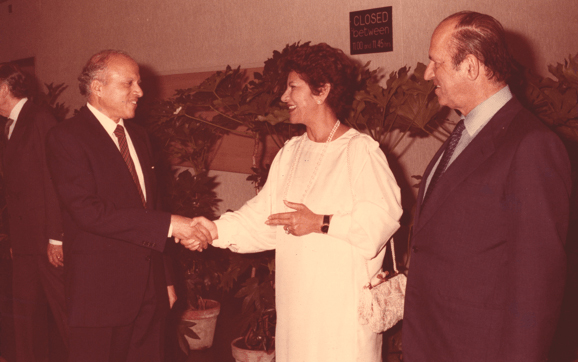 Naturally for an agriculturist, Italy is important because the FAO headquarters is in Rome.  I was very closely associated with FAO in many ways. I was a member of several committees under it and played a role in shaping its policies on behalf of the Government of India.
In 1974, the first food summit, the World Food Conference was held in Rome and India supported the establishment of the International Fund for Agriculture Development (IFAD), in the conference. I was one of those who moved the resolution establishing IFAD in Rome as an important agency for providing financial support to agriculture development in developing countries. IFAD came up in 1977 and is still working very well. Also at Rome, in the World Food Conference in 1974, there was a resolution that led to the establishment of the International Food Policy Research Institute (IFPRI) in Washington. IFPRI was established by CGIAR to provide research-based policy solutions that sustainably reduce poverty and end hunger and malnutrition.

I served as an Independent Chairman of the FAO Council from 1981 to 1985. During my tenure, there were several important happenings. The FAO Commission on Genetic Resources for Food and Agriculture was established in 1983 to oversee and guide the preparation of global assessments of genetic resources for food and agriculture. This led to the adoption of the International Treaty on Plant Genetic Resources for Food and Agriculture (ITPGRFA) in 2001. Almost all member nations of FAO agreed to it and signed this Treaty, which provides a solution for sustainable management of genetic resources and for their equitable distribution and exchange.

Another significant achievement during my association with FAO in Rome is the introduction of the concept of Farmers’ Rights. The International Undertaking on Plant Genetic Resources did not particularly refer to farmers’ rights. The question of breeders’ rights was getting popular in Europe. Pat Roy Moony from Canada and I decided that we should impart the thought of farmers acting as breeders, conservers and cultivators. They play a triple role: as cultivators they cultivate crops; as conservers they conserve, particularly intra-specific biodiversity like, for example, 150,000 varieties of rice are all conserved by farmers; as breeders, they select varieties. There was a lot of argument, but finally FAO accepted the idea of farmers being given their rightful recognition financially and otherwise for their contributions to both genetic resources conservation and their improvement through cross breeding.  Farmers’ Rights became incorporated in the FAO Treaty on Plant Genetic Resources for Food and Agriculture.

In 2012, I was elected as Chairperson of the Steering Committee consisting of High-Level Expert Panellists on Food Security and Nutrition (HLPE). We developed several reports and I helped transform HLPE into a demand-driven organisation from it being just a supply/donor origination.

FAO’s World Food Programme (WFP) and MSSRF have a very strong connection, thanks to Dr Pedro Medrano who was posted in New Delhi. In collaboration with WFP, we prepared the Food Security Atlas of Urban India, Food Security Atlas of Rural India and also the Atlas of the Sustainability of Food Security in India.  Later, with the help of the WFP, we prepared the Food Security Atlas of Cambodia too.
In Rome, thanks to Professor Scarascia Mugnozza who was Head of the Italian National Science Academy and also the Vice Chancellor of the University of Tuscia, I established a good collaborative relationship with the various agencies at the higher level. I have met the President of Italy Carlo Ciampi several times when I was chairman of the FAO Commission. He came to India too to commemorate the 10th anniversary in 2006 of the Scarascia Mugnozza Community Genetic Resource Centre (SMCGRC) established at MSSRF.

I remember in 1982, there was very severe drought in Africa. At that time, I was chairman of the FAO Commission and I met the then Pontiff of the Catholic Church, Pope John Paul II. He was very concerned with hunger and malnutrition and supported any work in Africa which aimed mitigate the adverse impact of drought. FAO also played an important role in a number of areas of development, particularly in Africa. The African development was an important contribution. Self-sufficiency in food was achieved in many areas in Africa through projects supported by FAO. I made some contribution to the development of these projects.
The next Pontiff, Pope Benedict XVI, invited me to stay in the Vatican for a couple of days to help in developing a strategy for the use of genetically modified crops. He asked me along with a few others to advise him on what should be done to ensure that the risks and benefits are measured carefully and that there is impartiality in the decision making, which is to be done purely at scientific level. A pontifical council came out in strong support of genetically modified crops as a way to feed a hungry world. A 2010 document from the Pontifical Academy of Sciences said “it’s no more dangerous than evolution.”

In 1985, I was elected as a Fellow of the National Academy of Sciences of Italy. In 1990, I was given an honorary doctorate degree by the University of Tuscia.