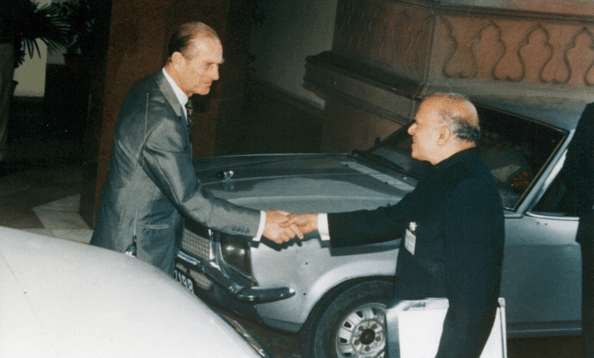 My first visit to UK was in 1950 when I went to do my Ph.D. at the Plant Breeding Institute, which is part of the School of Agriculture at the University of Cambridge . I earned my degree in 1952, for my thesis, ‘Species differentiation and the nature of polyploidy in certain species of the genus Solanum – section Tuberarium.”  It was a continuation of my work on the potato, and I developed methods to cross breed the variety by another culture. When I was in Cambridge, I had the opportunity to meet the Minister for Agriculture, UK, as well as the Chairman of the Board of the National Institute of Agricultural Botany (NIAB). They were interested in my work on developing varieties which were resistant to some of the pests, including the golden nematode. The potato is an important crop in the UK.

In 1985, I was elected President of the International Union for Conservation of Nature and Natural Resources (IUCN). His Royal Highness Prince Philip was then President of the WWF International. In those days, the President of IUCN was Vice President of WWF International and vice versa, the President of WWF International became the Vice President of IUCN. In that capacity, Prince Philip used to attend our IUCN meetings and he was always very constructive. He has invited me a few times to the Buckingham Palace where we discussed in detail both environment protection and biodiversity conservation. His son Prince Charles also took a lot of interest in biodiversity conservation. In fact, he invited me and my daughter Nitya to his organic farm, which is one of the best I have seen. At the end of our visit, we had a long conversation on the importance of sustainable agriculture. Charles liked my phrase evergreen revolution that I coined to indicate improving productivity in perpetuity without ecological harm. Both father and son fully supported the Iwokrama Rainforest Conservation and Development project in Guyana.

The UK has been a major supporter of the IRRI and also supports India’s programmes in the field of agriculture.
Fitzwilliam College at the University of Cambridge which is my college made me an Honorary Fellow in 2014 when Ms Nicola Padfield was the Master of Fitzwilliam. My association is continuing with the new Master, Sally Morgan, and Baroness Morgan of Huyton.