Bringing agriculture, nutrition and health together with nutri-gardens: WHO Chief Scientist emphasizes need for convergence 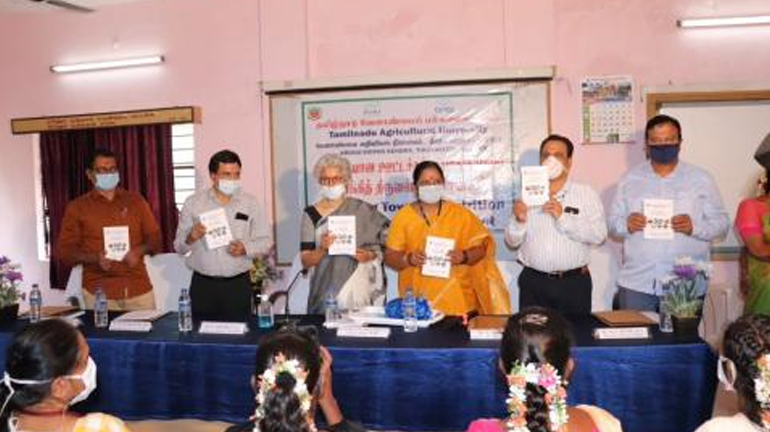 “What do you want to become when you grow up?” The young girl blinked nervously before whispering, “A doctor.” “Then you need to first take care of your health and nutrition and most of all, speak up for yourself and what you want.” WHO Chief Scientist Dr Soumya Swaminathan’s brief interaction with a group of adolescent girls was one of the many ways in which the theme of nutrition was emphasized during an event at the model nutrition garden at the Krishi Vigyan Kendra (KVK), Thiruvallur. The nutri-garden implemented jointly by MSSRF along with KVK and Tamil Nadu Agricultural University in Thirur in Tamil Nadu is through the Grand Challenges initiative of the Department of Biotechnology – BIRAC, Govt of India and Gates Foundation India.

The nutrition garden is a scientifically established intervention to categorize plants based on the nutritive properties, provide planting material to the community and build awareness on cultivation and consumption to address nutrition requirements. The event on December 17 organized by MSSRF with the KVK was held with key stakeholders including representatives from the farming community, local self-government, school children, teachers, ICDS officials and medical community, representatives from TNAU, MSSRF and the agriculture department presided over by the District Collector with the WHO Chief Scientist as special guest. 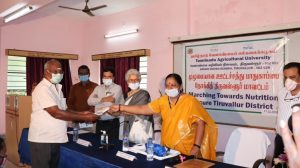 The Thiruvallur District Collector, Mr P Ponnaiah said, “While it was food security so far, from now on, we are now looking at nutrition requirement since as a population we are still malnourished. This simple but effective intervention – the vegetable garden – is something we used to have in our own backyard many years ago. We are trying to revive this with the nutrition perspective. For Thiruvallur about 50% of the 1760 Anganwadis already have gardens and we aim to bring it to 100%. We should develop this initiative as an economic activity, to make it viable. Thiruvallur should be a model for the country,” he said. 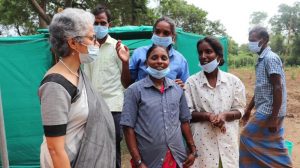 Dr Soumya Swaminathan, Chief Scientist, WHO said “We need to focus more on nutrition – whether it is the National Family Health Survey, the Human Development Index or the Hunger Index, it is clear that while we have progressed in many spheres we are still backward when it comes to nutrition. If India is to be a super power, we need good nutrition and development. We also need lifestyle changes to address hypertension and diabetes which is very high in Tamil Nadu. Dietary diversity must be inculcated from childhood and diets at home and school have to be nutritional and balanced. The nutri-garden should spread to every school, anganwadi and village with a community garden to address growing malnutrition deficiency. We can make Thiruvallur a model district and take it across the country to scale-up; but we need co-operation where everyone comes together. I congratulate the team of TNAU-MSSRF-KVK,” she said.

The Tamil Nadu Agricultural University (TNAU) Director of Extension Education, Dr M Jawaharlal said, “We have achieved food security and production capacity especially in Tamil Nadu and across Inda. However, we need to address the important issue of malnutrition. The horticulture expertise to establish a model garden with relevant plant material for micronutrients is being done by TNAU and MSSRF in partnership with the Thirur research station. We need to build a healthy and nutritious future for children,” he said.

Dr K S Murali, Executive Director, MSSRF placed special emphasis on the First 1000 days where pregnant and lactating mothers need importance. He also said the elderly, who are 60+ need special attention. “We used to consume fruits etc. directly from trees around our homes, but that is not the case now, so we need to support nutrition from gardens. It is good that Anganwadi workers are being involved in the awareness process and that the garden is a training ground,” he said.Joint Director, Agriculture, Mr R Sampath Kumar, spoke of the need involve in participation of this nutri-garden initiative so they can get involved more actively. 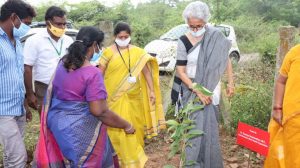 Dr G N Hariharan, Director – Biotechnology, MSSRF spoke of how half the women between ages of 15-49 are anaemic in Tamil Nadu. This also affects children. “Due to more consumption of rice especially in our state, we need to educate people about nutritious foods in the garden to supplement what is needed for the people such as Orange-Fleshed Sweet Potato to help Vit A deficiency. Most of all, the participation and co-operation of the people is important,” he said.

Dr P Santhi – Programme Co-ordinator, Krishi Vigyan Kendra (KVK), Thiruvallur, spoke of plans to reach over 500 mothers through the coming month with nutrition awareness and planting material. The Child Development Project Officer, Ms N Krishnaveni said, “In September 2020 during Poshan Maah, we started a nutrition garden in every anganwadi and took planting material from here on the District Collector’s orders. We face maintenance problems, such as fencing since the garden gets eaten by stray animals and needs further support.” Those who are unable to afford nutritious food can be given from Anganwadi gardens, she suggested.

Dr Sathya Jagannathan, Prof Pediatrics, Chengalpattu Medical College said out of 13,000 deliveries every year in the hospital, about 40% newborns were underweight at their hospital, mainly due to the anemia of parents. Also 50% of maternal mortalities were due to anemia. To track the underweight children, the ICDS team needs to follow-up and health, social welfare departments and hospitals should converge, she said.

Mr N Ramachandran, from the Arcot Kuppam Higher Secondary School Teacher said anganwadi workers and teachers have the responsibility towards ensuring the health of children. Parents are happy when they visit and the teachers also feel it is a very fulfilling job.

A booklet on nutrition awareness was released and handed over to teachers during the event. The team visited the nutrition garden where the team of horticulture experts explained the layout and the various nutrient-based classification in the garden.