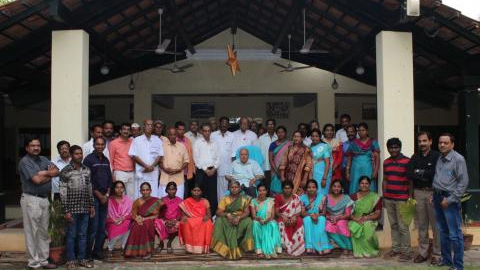 July 14, 2017: Farmer representatives from six states came together for a day-long discussion on how the scientist-farmer interface could be strengthened. The discussion hosted at M S Swaminathan Research Foundation on behalf of the Indian Council of Agricultural Research (ICAR) was an opportunity for scientists to listen to the farmers’ perspective on scientific and research agenda in agriculture.

The farmers were from Tamil Nadu, Kerala, Maharashtra, Odisha, Andhra Pradesh and Karnataka. Their inputs would feed into the report of an ICAR Review Committee chaired by Dr T Ramasami, Former Secretary DST, Government of India.

Prof M S Swaminathan, Founder MSSRF who chaired the sessions and listened to the farmers as they articulated their various views and concerns suggested that ICAR could institutionalize this kind of interaction on a thematic basis. “Some common and some specific problem have been raised, several of them pertaining to policy issues. There is need to strengthen public policy research in agriculture, which is currently weak.” He also suggested that these dialogues could be organized from region to region to overcome language barriers. It would be possible to respond to their real needs he said.

Dr Ramasami, ICAR Review Committee Chair said he had been listening to hundreds of farmers as part of this exercise. He said a portal or a dashboard on agriculture research needs could be created so that any farmer in this country who would like to address any problem on the research front can upload his query and concern.

Farmer Mr Satish Babu from Andhra Pradesh shared his innovation with regard to cattle based agriculture while Mr Diwakaran, from Kerala spoke of the need for campus level interventions. Farmers from Karnataka called for farmers – scientists committees at the village level. In Odisha, the concern was in obtaining inputs for organic farming. Farmers from Tamil Nadu suggested that the research should be directly done in farmers’ fields. Maharashtra farmers expressed concern over the decline of sorghum and suggested that it should be given more attention.

After attending the meeting and listening to the farmers, Prof Swaminathan has listed 14 suggestions that could be incorporated into this review committee report for their consideration. His suggestions to Dr Ramasami are as follow:

It is said that one ounce of practice is worth tonnes of theory. This is why farmer’s knowledge and wisdom should be fully utilised in developing our research strategies and programmes. I also recall that Mao Tse-tung once told his agricultural officials “please listen to farmers before you advice them”. ICAR and all other institutions should develop this culture.

Some of the important points made by farmers are the following.

These could be included along with other more location specific points made by the different participants.