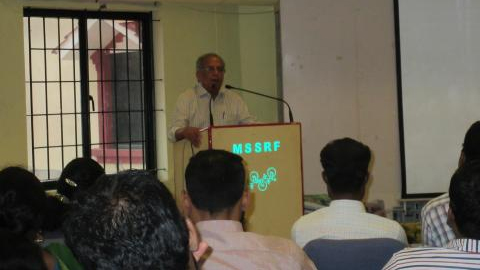 Chennai, February 21: Climate Change is a mega bomb that has been detonated, and affects all, not just perpetrators said Dr Rama Singh, geneticist from McMaster University, Canada at an MSSRF Seminar on February 14, 2017. He was speaking on the topic “Reflections on science for peace – from war on hunger to war on bomb to war on climate change”.

Dr Singh spoke about three major events of the 20th century, two World Wars and the Green Revolution which had far reaching effects. In these cases, there were movements to talk about change for the better. However, effects from Climate Change, a phenomenon discussed after 1970s has not been given due attention. While millions of lives have been lost in droughts and floods, this has not been attributed to Climate change.

The importance of democracy and the democratic process in a country to bring back humanity and consciousness of people was emphasized by Dr Singh. He also suggested that focus on bringing back consciousness and humanity into policies should be the yardstick rather than materialistic wealth.He spoke about his initiative, called Mahila Shanti Sena, in Bihar, Odisha and the North-Easern states of India to empower women through self-driven empowerment in addition to through legislation”.

Prof M S Swaminathan, Founder MSSRF, congratulated Dr Rama Singh for his talk and on his various initiatives taken towards peace and empowerment among women.

The talk was attended by researchers, scholars and scientists at the Foundation and it was followed by a lively discussion.

Dr Rama Singh at the Coordinating Council of Centre for Peace Studies, McMaster University Canada, has authored over 175 papers and articles and co-authored four books.