A novel approach to provide timely analysis on soil parameters 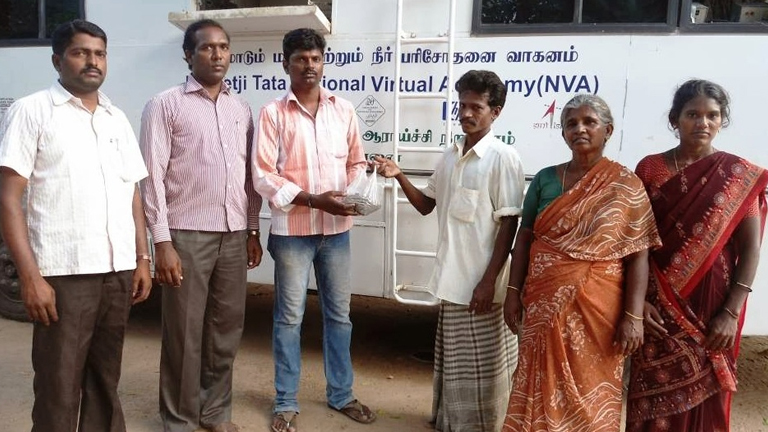 Soil is inevitable for crop growth. The health of the soil determines the health of the plant. In this context, knowing the health of the soil is very important for the farmers. It is done through soil sampling and testing to study its nutrient status. At present, the soil management practices adopted by the majority of farmers are not based on scientific principles. Indiscriminate use of pesticides and fertilisers has made the soil incapable for cultivating crops in many regions. Awareness on soil health and the optimal use of fertilisers and pesticides plays an important role in this regard.

In a novel concept, MSSRF began the mobile soil testing van concept on August 7, 2007. The van was gifted by the Andhra Pradesh government to the Foundation. The van holds the equipment to conduct soil and water analysis. One of the advantages of the van is that soil samples can be collected and analysed on the spot. The farmers are charged Rs.20 for the basic tests that include testing for soil pH, soil electrical conductivity, and for available nutrient levels of nitrogen, phosphorous and potassium (NPK), which in most cases is sufficient for the majority of farmers. The agricultural departments and universities do provide similar tests, but it may take 2 weeks or longer to get the results and their labs are also stationed in one locality. With this facility the team also analyses water used for irrigation, which is at present not done by other institutes.

In a day, about 50 samples can be analysed with the equipment. The readings from each parameter are recorded in a soil health card, provided to each farmer. On the basis of the analysis and interpretation of results from the sample collected, the soil scientist recommends the optimal level of fertilsers required per acre/ hectare of land depending upon the kind of crop he/she planned to take up. The MSSRF mobile van has helped to test soil samples and at the same time create awareness about soil health across villages in Tamil Nadu, Andhra Pradesh, Puducherry and Karnataka, and the scientists have conducted field level demonstrations too. The equipment can also be taken out and placed in a physical lab as long as it meets the temperature requirements.

Till date, 12,203 soil samples and 1,872 water samples have been analysed. Totally 9,210 farmers have been supported and 1,032 villages across 20 districts have been covered.