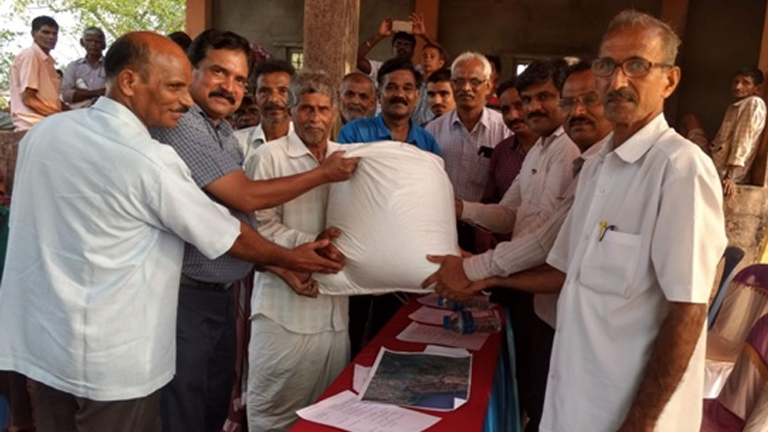 To increase the area under Kagga cultivation, technical guidance in the form of on-farm demonstration were provided to the Lukkeri – Manikatta farmers by MSSRF and University of Agricultural Sciences, Dharwad (UASD). In addition, MSSRF has initiated awareness meetings with the farmers and officials of the Department of Agriculture, Government of Karnataka for establishment of Seed Banks, educational tour for farmers to similar saline tolerant traditional paddy variety cultivation areas.

In May 2018, Kagga seeds were distributed to 100 farmers through the village Seed Bank for cultivation in the Lukkeri-Manikatta estuarine area in a function jointly organized by MSSRF, UASD and University of Agricultural and Horticultural Sciences, Shivamogga. This meeting was attended by 160 Kagga farmers and their representatives Mr. C.R. Naik, President of Manikkatta Growers Association, Shri. Shridhar Pai, Secretary, Mr Shivaprasad Gaonkar, Deputy Director of Agriculture (Uttar Kannada), Mr. Shankar Hedge, Assistant Director of Agriculture, Department of Agriculture, Government of Karnataka, and Officials from UASD and MSSRF Participated. This function is a part of the project entitled “Reclamation of Saline Soils of Karnataka: An integrated approach towards Biosaline agriculture” supported by the Department of Agriculture, Government of Karnataka.

Traditional landraces are valuable genetic resources, that are resilient to climate change, and well adapted to the local soil types, climatic conditions, cultivation practices etc. Saline tolerant Kagga rice was cultivated in more than 2,000 hectares (ha) in the bed of Aghanashini estuary. However, the current area under cultivation has shrunk to less than 10 acres. Farmers of Manikatta cultivate Kagga in a cooperative manner and farm families in Kumta region prefer Kagga for its good nutritional quality, taste and its adaptability. Farmers of Manikatta expressed their interest in reviving Kagga cultivation and reclaim the earlier cultivated land which is currently extensively used for prawn cultivation.