FFMA is transforming lives of fisherfolk: a story from Andhra Pradesh 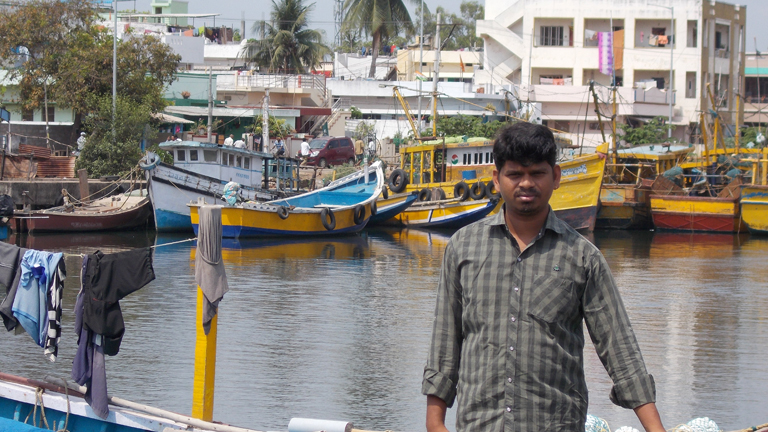 Potti Jagadish is from a village called Parlopeta, in the state of Andhra Pradesh, 35 years old Potti Jagadish being the eldest in the family lives with his parents, two brothers (Raju and Sathish) and a sister. His family members except his brother Sathish who is pursuing a degree in MBA privately have minimal or no education.

Initially his father was a crew member in a fishing boat, while Sathish and Jagadish worked as painters, and then Raju started fishing as a crew member in a fishing boat following his father and then slowly learnt driving the boat and also learnt to do minor repair/service work. Potti Jagadish says that he has seen his family growing economically, from thatched house to their own concrete tiled house. They constructed their own fiber boat worth Rs. 3.5 lakhs, fitted with big meshed Gillnet and employed 3 crew members for the new buoy. Jagadish and Raju accompanied the crew for fishing in traditional methods. The catch wasn’t great, but was okay to keep them afloat; they got meager catch of tunas, seer fishes, pomfrets, scianids and catfishes. It was also a time, when voyage fishing wasn’t really preferred, and the fishing trips were used to be super short and their progress was at a snail’s pace.

Potti Jagadish says that in 2012, MSSRF staff visited his village and organized an awareness meeting on Indian National Centre for Ocean Information Services (INCOIS) . “Raju and I joined as enthusiastic participants in the programme. The staff spoke to us in detail about Potential Fishing Zones (PFZ), explaining its science of how satellites could give potential fishing grounds based on chlorophyll concentration. They also shared information on Ocean State Forecast, GPS, and other new technologies to improve our catch and thereby to lead better livelihoods. After the event, I registered my mobile number for further communication. From then onwards, I started receiving data, such as, wave height, wind speed and wind direction on a daily basis through their voice messages in the evenings. What caught my interest was the PFZ; it gave me a thrill to know that a huge school of fish could be found in a said area. I decided to invest in a GPS, the most significant tool to navigate our boat! And that’s how our boat got fitted with a GPS”.

According to Potti Jagadish potential fishing zone data is a boon, that it has helped them to get multifold catch. Whenever he receives PFZ information, he would make it a point to somehow get to the zone, he said. The most common catch from the information included tunas, sword fishes, and dolphin fishes with 75 to 80% accuracy, but the major hitch is not being able to receive the messages after sailing into the middle of the sea, so they are able to get the message updates only while they are on the land. He says, because of the message updates, he benefitted so much financially and that he could get his sister married.

Jagdish says 2014 was a memorable year when he was introduced to Fisher Friend Mobile Application (FFMA) that was designed by MSSRF. Apart from the PFZ information that he received from the message services, he was also able to get other useful information through FFMA. Potti Jagadish says, “Normally our fishing grounds are towards North from Kakinada to Chintapalli, and during some seasons, towards south from Kakinada to Narsapur. Our gears also include hook and line. In Bhairavapalem, an area close to us, there is Reliance Rig where at times big ships come, those are times when we fish near the big ships and get brilliant tuna catches. My most sought after features in FFMA are tuna PFZ and ocean state forecast.  Many times I have been saved, thanks to timely disaster alert on the app. There have been multiple instances when we stopped fishing and have headed back to safety because of the information. Not just me, I have also passed information on impending cyclones and high winds to my friends.  I find the FFMA GPS option also very useful, because our GPS is fixed in the boat, we get the exact location now and Fisher Friend Mobile Application has become an integral part of my family and our growth”. Today Potti Jagadish is a owner of a 7.5 lakh worth fiber boat.