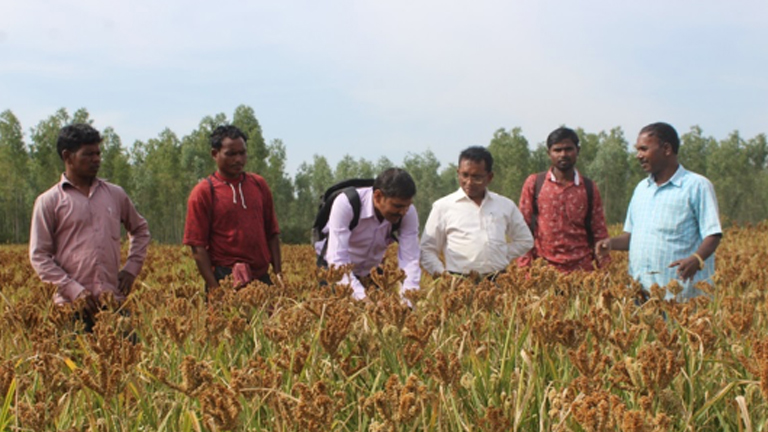 Majority of the farmers in Koraput district of Odisha are tribal, resource poor and mostly dependent on onset of monsoon for agriculture. The rainfall in this region is erratic and prolonged drought conditions are common occurrences. Numbers of rainy days were decreased over of period time. Finger millet is the second staple food after rice. The farmers were cultivating many traditional varieties in the past, but now have changed to improved varieties because the traditional varieties continously performs low in terms of productivity due to mixture of seeds, loss of purity.

Foreseeing the sustainable yield in finger millet, MSSRF launched a project on “Enhancing Production and Productivity of Millets and Pulses in Odisha through an Alternative Seed System Model for Production and Supply of Improved Seed Varieties” in April,2018. Making availability of quality seeds of improved varieties in time and incorporation of systematic practices and deployment of scientific method is novelty of the project. The project is executed in Mustiput and Umuri Grampanchayat in Koarput district. The project introduced new technology like System of Millet Intensification (SMI) and line transplanting.

The process to start with, held an awareness meeting with the farmers, and Organized training programmes and capacity building measures to promote SMI and line transplanting methods of cultivation. Lead farmers were provided with breeder seeds @ rate of 1 kg of breeder seeds per acre. 82 farmers were selected for this. New technology includes raised bed nursery, spacing of 25 X 25 cm and transplanting of 15 to 20 days old seedling, weeding by cycle weeder every 15 days interval at least two times and application of organic manure among others.

During Kharif 2018, two varieties of finger millet ML-365, KMR-204 breeder seeds were introduced for the first time in the region. Arjun, Kalua, Chilika, varieties preferred by the farmers were included along with a local variety known as Jam, and all of them were compared for performance in 62 acres, covered in seven villages.

In this participatory trial, MSSRF scientists and farmers evaluated the varieties, based on plant stand, resistance to pest and disease, drought and yield. Biometrical analysis and regular monitoring of pests and diseases was used as methodology. During the pest scouting, it was found that the crop was free from pests and diseases. The rainfall in this region is erratic and prolonged drought conditions are quite normal. Number of rainy days was decreased over a period of time. The unavailability of rain at the crucial phases of the crop is the biotic constraint farmers facing in this region.

The farmers of Umuri and Mastiput Gram Panchayat observed that among all the varieties, cultivated KMR-204 performed better in terms of no. of productive tillers, size of panicle, finger  per panicle, grain filling percentage and grain yield.

The Biodiversity team is implementing this project.