How collectives are improving the livelihoods and well-being of single women: learning from Puducherry 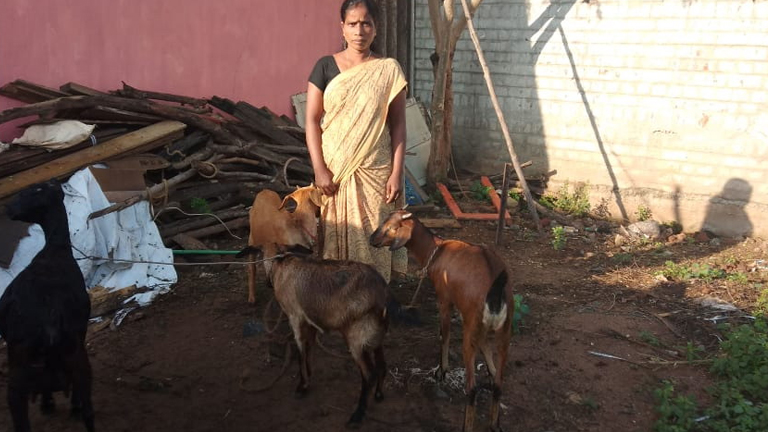 Sarala is a 35-year-old single mother belonging to socially marginalized community. She is working as an agricultural labourer in Poriyur village, Puducherry. She has been a member of a self-help group (SHG) belonging to the Innuyir Grama Sangam (IGS), a federation of women SHGs, since 2000. Her husband died of alcoholism several years back, and since then she has been the sole bread winner for the family. Her son aged 19 is doing his Bachelors course and her daughter aged 17 is in 12th grade schooling. Her husband was a mason, and before his death she was never involved in any productive work, nor had she any active decision-making role even in household management. She had no exposure to banking and no knowledge on the entitlements provided by the government. Post her husband’s untimely demise, she was forced to manage the family single-handedly. She started working as an unskilled labourer in the construction field. However, it was a challenging task to work in the sector as a single woman. Added to this, her lack of awareness and knowledge on the basic entitlements as well as the associated formalities and procedures were major hurdles in managing the day-to-day affairs. The discriminatory approach adopted by the women’s group within the IGS added to her woes. The group norms allowed only Rs.10,000/year as loan to a single woman member, in contrast to Rs.40,000/-  provided to married members. The loan amount from the SHG was insufficient to meet bulk expenses related to children’s education, renovation of house and addressing household cash flow during the off-season periods.

She was forced to avail loans from the local money lender at an exorbitant interest rate of 60% per annum. Her wage earning was not enough to meet daily household expenses and she ended up pledging her only house and whatever little valuable assets she owned to repay the loan amount. It was at this juncture that the ‘single women collective’ was formed in the region. This was following a field study done by MSSRF, which revealed that one-third of the members of the IGS who were single faced similar issues as those of Sarala. Puducherry State has the dubious distinction of having a high percentage of single women (1.24%) when compared to the national average (0.63%) in India, as per the data on marital status provided by the Census of India (http://www.censusindia.gov.in/2011census/C-series/c-2.html).

This issue was noticed by MSSRF in the year 2013, when detailed focus group discussions with single women members belonging to various SHGs at different hamlets were held. These issues were discussed in the IGS Executive Committee (EC) meeting. Following this, it was decided that in future such meetings would involve the EC members and staff of IGS. Three such meetings with the EC members and staff of IGS were held, and MSSRF, based on its experience of effectively nurturing single-women collectives in the Vidharba region, decided to replicate in Puducherry.

Intervention and experience jointly evolved the institution-building approach, strategies and specific programme intervention for addressing issue of single-women empowerment and entitlements in the year 2014/15. Single women in Poriyur and Sulthanpet were mobilized into SHGs for savings and thrift as well as into joint liability groups on goat rearing and dairy farming and non-farm livelihoods like vegetable vending, small eateries, retailing of cloths, unskilled masonry work, etc. The norms of lending was increased to a maximum limit of Rs.50,000/, and the interest rates on group lending was fixed at below 18% per annum. This approach changed the lending norms followed in other SHGs.

Sarala is an EC member of the Durgai single-women federation and is the president of a primary group. Post her capacity enhancement as a member of the single-women association, she now conducts training sessions on backyard poultry, dairy and goat rearing and Japanese quill farming.  She has been able to avail institutional credit through the JLG (joint liability groups) at nominal rates towards strengthening goat rearing as well as meeting her daily livelihood and bulk expenses. Membership in the single-women collective has facilitated easy processing of her widow pension. In short, participating in the single-women initiative has helped her tide over the cultural, institutional and societal challenges faced by single women and empowered her to manage her affairs on her own. This initiative has also provided her with an opportunity for taking up leadership positions and equipped her to engage in multiple non-farm livelihood opportunities. Capacity-building, received as part of this initiative, has evolved her as a trainer and she now contributes to the upliftment of women like her in the society.

The initiative now covers about 100 single-women groups with 1,100 members [m1] like Sarala and is spread across 33 villages, covering 25 panchayats in the Villiyanur taluk of Puducherry.

As on date, 752 single women members have accessed institutional credit to the tune of Rs. 338.40 lakhs, and the rate of lending is 9.85% which less than that of other SHGs. The model of promoting exclusive single-women-based grassroot institutions is an approach that is replicable and sustainable across all socio-economic contexts. The success of this model in Vidharba and Puducherry shows this as an effective means to address the various socio-cultural and development challenges faced by single women and ensure these women a life with dignity in the society.