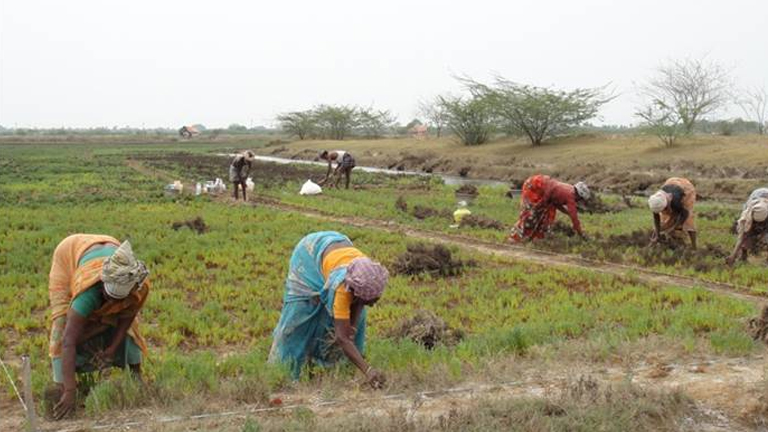 MSSRF initiated the restoration of 115 hectares of degraded mangroves in Pattuvanachi estuary) in T. Maravakadu Reserve Forest, Muthupettai, jointly with the Veerankoil Village Development Committee (VDC) and the Tamil Nadu Forest Department. Restoration work was preceded by participatory rural appraisal (PRA), preparation of micro plans with detailed work schedules, budget and physical assessment of the area for its suitability for planting (soil texture, topography, soil salinity, shore water salinity and pH and mangrove flora present close to the area). Digging of canals, the major task in the restoration project in the degraded area, resulted in regular tidal flow avoiding water stagnation. Nineteen main canals with a total length of 11,500 metres and 1,075 side canals with a total length of 32,250 metres were excavated. About 43,7500 mature Avicennia spp. seeds collected from the Muthupet mangrove region were planted with an interval of 50 cm along the canals at a depth of 20 centimetres below ground level from November– December 2017. In addition, about 6,000 Rhizophora apiculata and R. mucronata spp. propagules collected from the Pichavaram mangrove area were also planted at 2 metre interval along the sides of the natural creeks. The initial estimates showed that the survival percentage was more than 90 percent in March 2018.

Three main canals with a total length of about 2,600 metres and side canals with a total length of about 72,000 metres were dug in the selected degraded mangrove forest site between July and August 2017. A total area of 90 hectares of work was covered for the reported period. Approximately 55,000 Avicennia marina and Avicennia officinalis seedlings and an additional 80,000 seeds of Avicennia spp. were planted along the canals between October and December 2017. Subsequently, an additional 110 hectares of canal digging work had been planned and the work was initiated in April 2018. Planting will be initiated from October 2018 onwards. An orientation programme on mangrove restoration for the local community was organized. It was attended by 59 people (29 women, 30 men) and 5 project staff. The tidal flushing was found to reduce pore water salinity from 87 parts per thousand (ppt) in August 2017 to 54 ppt in December 2017.

Mangrove restoration activity started in 5 hectares during the past year was continued. An additional area of 10 hectares of degraded mangroves near Sarsole, Navi Mumbai was taken up. This was chosen for restoration with the participation of a local NGO, Vanashakthi, and the State Forest Department. Nursery raised mangroves saplings, namely Rhizophora apiculata and Rhizophora mucronata (about 2,000 saplings) and Avicennia spp. (about 8,000) were planted in addition to about 12,000 mature Avicennia spp. seeds. Natural seedlings of Avicennia spp. were found to regenerate more than six times in comparison with other genera.