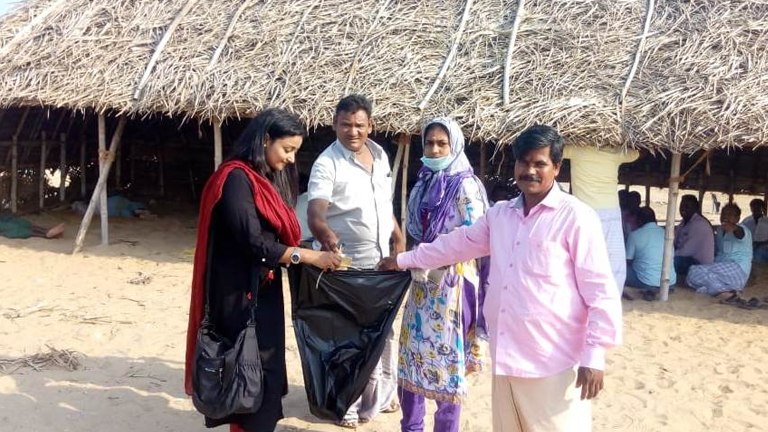 In line with the spirit of International Coastal Cleanup Day celebrated worldwide on September 15, M S Swaminathan Research Foundation’s Fish For All Research and Training Centre celebrated the movement by mobilising volunteer groups to pick up trash and recyclables along the coast of Poompuhar in Tamil Nadu.

It was heartwarming to see volunteers of different ages and backgrounds coming together to raise awareness about coastal pollution and its effects on human, environment and marine ecology.

College students from Pandit Jawaharlal Nehru College of Agriculture and Research Institute, Karaikal while picking up plastic bags and containers strewn along the harbour of Poompuhar shared their views on the adverse effects of increased use of plastic. As agricultural students, they had become aware of the ill effects of plastic waste disposal on soil and water quality while interacting with the community during a survey they conducted on the Fisher Friendly mobile app developed by MSSRF. Armed with their knowledge, they have mobilsed Poompuhar fishermen for ocean conservancy in the past.

During the coastal clean-up drive

Many of the fisherwomen that have long been associated with MSSRF through Self Help Groups may not know the deep scientific details on how micro-plastic fibers enter the water cycle but are certainly aware of the scourge of plastic pollution in the oceans.

Nandini, a dynamic lady and president of one of the MSSRF-led SHGs has learnt that the use of low graded plastic containers is not only environmentally unfriendly but hazardous for her family’s health too. Every time she goes with her son to the coast to see off her husband who is a deep-sea fisherman, she lets her son pick up some plastic waste to dispose off in the dustbin later. She believes such persuasions by parents are an effective way to foster environmental responsibility in the next generation. Talks on marine cleanliness soon evolved into discussion among village women on eco-friendly alternatives to plastic bags.

The women recalled that they used reusable bags and bamboo baskets before plastic dominated the field. MSSRF hopes to re-inculcate similar practices through awareness, among other plans. The fisherwomen admit that events conducted by MSSRF’s Fish For All centre which focus on concepts like marine biodiversity conservation and sustainable fishing makes them ponder about the deadly effects of marine pollution and pushes them to adopt sustainable fishing practices.

Organising more than 500 programmes in past 3 years, MSSRF’s initiatives have so far influenced more than 35,000 participants in Poompuhar and Karaikal. Fishermen switching from single-use plastic packets to water cans on their fishing trips indicates a perceptible chance for change in the mindset of the community towards sustainability.

When leaders drive campaigns, they pave the way for citizens to join the movement and inspire action. To tackle the rising trend of dependence on plastic, panchayat leaders came out sportingly to participate in the coastal clean-up drive.

Mr. Ratanavelu, one of the traditional panchayat leaders explained how they have been strongly persuading shop keepers to restrict the use of polythene bags. They are also spreading messages of environment cleanliness to villagers during panchayat meetings. Adopting an action-oriented attitude, the panchayat is planning to directly curb the non-recyclable plastics supply sources within their periphery.

Enjoying influence among villagers who revere and respect them, the traditional decision making committee’s readiness to support public awareness programmes and implementing the Tamil Nadu government’s proposed ban on use of plastic items from January 1, 2019, is expected to be successful.

34 bags of trash filled with plastics and nets recovered

Plastic is the most pervasive marine debris. As volunteers fanned out to pick up litter thrown up by the sea, it was abandoned nets, ropes, and plastic and liquor bottles that formed the majority of the trash. Around 34 bags weighing approximately 120 kg were collected in less than an hour by the active participants. As students grumbled about not finding dustbins to dispose of their pet bottles after refreshment, it dawned on them that lack of availability of trashcans could also prompt littering in public places.

At the end of the day, for many, the event turned out to be a power tool for action towards a cleaner coastline.