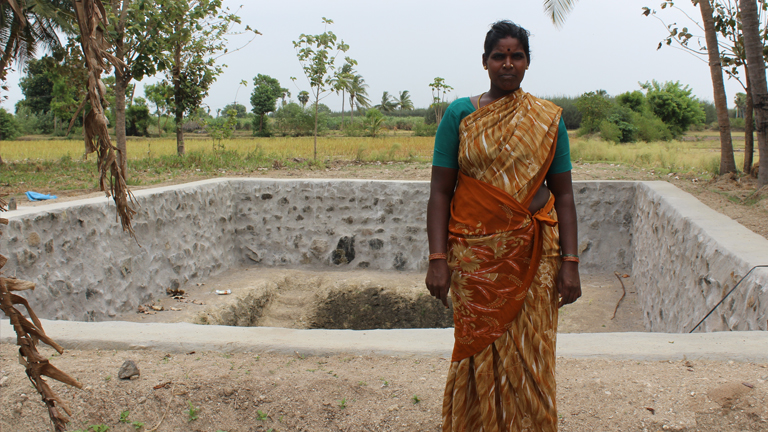 Nallamur is a village in Tindivanam block of Villupuram district where 82% of farmers depend on open wells for irrigation. However more than 70% of wells in the region are defunct and abandoned due to siltation and subsequent lack of maintenance. The only possible way is to desilt and deepen the existing wells, to augment the availability of ground water for irrigation.

Realizing this, the Nallavur Farmer Producer Company Limited (NAFPCL) in Villupuram  district extended  support for open well rejuvenation to its small holder members. NAFPCL provides support on inputs and output marketing, capacity building with necessary forward and backward links to improved technologies on agricultural production and natural resource management. Ms. Pushpa, is a small farmer who is actively involved in agriculture and is also one of the leaders of farmer producer group. She was a front runner for dovetailing schemes and others benefits for members of the group. Her proactive leadership was instrumental for the well-selection committee of NAFPCL to extend support to her application for well rejuvenation, which is under joint ownership with her extended family. The well supplies water to six acres of land including Pushap’s and her brother in-laws. There were frequent crop failures due to insufficient water to even meet the critical irrigation and this also led to quarrels among the brothers. NAFPCL selected her as one of the beneficiaries for extending support for well rejuvenation as they realized that renovation/rejuvenation of this one well could enhance the livelihood of three families.

Her families’ and her efforts at mobilizing loans from formal and non-formal financial institutions were all in vain. Hence they changed and continued to follow rain-fed system of cultivation. The land was brought under black gram and groundnut in rabi season and was left barren in the remaining season.  During this time she  worked on nearby farms for wage.

“I thank my group members who gave me an opportunity to get this wonderful well project which increased my farming income and also purchasing power besides it also increases income of my two brothers in law’s families and ensuring three families’ livelihood” said Ms Pushpa. She belongs to Malligai Farmer Producer Group consisting of 17 members. She mentioned that earlier she didn’t have borrowing power, but after rejuvenation of the well she is able to cultivate three crops in a year, with assured returns..

She spent Rs 2,40,000 for well rejuvenation including her advance contribution of Rs.20,000. The workincludes de-silting, deepening and  wall construction.

After well rejuvenation, she is able to cultivate black gram in 75 cents, groundnut in one acre, vegetable in half an acre and fodder in five cents. She also ventured into dairy with the support of NAFPCL. She got milch animal and forage grass. Dairy provides her daily income which helped to repay loan in monthly basis to NAFPCL. “I am capable of earning Rs 1,75,000 as an income from the agriculture activities in both seasons and milk in a year. I am now  confident as I can earn income because of the well rejuvenation and my sincere gratitude to WABAG, MSSRF and NAFPL” said Ms.Pushpa.

Her leadership skills, her integrity, hard work and capability as a farmer  led to her beingas one of the beneficiaries for financial support and has led to her emergence as a  decision maker at home. Her husband and his brothers now consult her on crop selection decisions and also while initiating any new activity. Based on her suggestion they have also diversified into floriculture.Floriculture provides income on a daily basis. There is visible improvement in purchasing power as the household now often purchases household items.