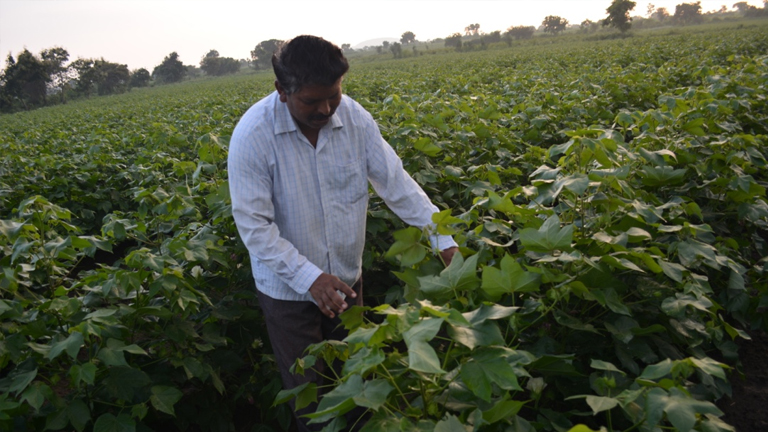 Jeevanrao Devtale was introduced to the Village Resource Centre of M S Swaminathan Research Foundation in 2015 during an awareness meeting in his village Kurzadi, about 30kms from Wardha, the District headquarters. Mr Nilesh Patkar, Agriculture Scientist of the Foundation, had conducted the meeting to introduce various agro-advisory services to the farmers of the village. Jeevanrao, a farmer by birth, started farming by helping his father even as a child. He owns 12 acres of irrigated land in the village. He has an open well for irrigation, which gives sufficient water for the crops during the seasons. He does organic farming in 2.5 acres of land with fruit trees such as sweet lime and pomegranate and the rest with cotton and soybean using inorganic techniques. His family consists of  6 members including his parents, wife and two children. He has studied upto 10th standard.

In  2016,  during the Kharif season, the VRC of MSSRF, in collaboration with the Krushi Vigyan Kendra, Selsura near Wardha, had mobilized free distribution of 30 kgs of Jacki 9218 variety Chick pea seeds to the farmers, and he was one of the farmers  who benefitted. Like other farmers, he was also guided to treat the seeds with mixed liquid culture of Trichoderma viride, PSB and Rizhibium 100 ml /30kg of seeds which was  made available to him from a private laboratory. He followed the same and ensured 95% sprouting of seeds. He also observed non-infestation of fungi during the initial stages of seedling. He compared his field with the neighbouring farmer who did not treat, and who  had a  35-40% loss of seeds due to infestation of fungi during the seedling stage. He was satisfied with the proper, timely advisories and support given by the VRC.

A group consisting of 20 farmers fromthe village, was formed by the VRC , and along with Mr Nilesh Patkar, used to visit the Chickpea fields of each of  the 20 farmers once in ten days to observe the growth and occurrence of any disease and pests. This helped Mr Jeevanrao to understand the scientific methods of crop cultivation. He harvested 35 quintals of gram from 5 acres, an average of 7 quintals, which is higher than the normal yield expected. He did not sellthe produce for a better price during the month of July-August, when the seeds are in demand for the next season.  As per the present market price (July 2017) of Rs 5100 per quintal, he has an assured income of Rs 1,78,500.

Jeevanrao is a scientifically knowledgeable farmer in chickpea crop cultivation,and is  satisfied for that he has reaped a higher yield and better quality produce.