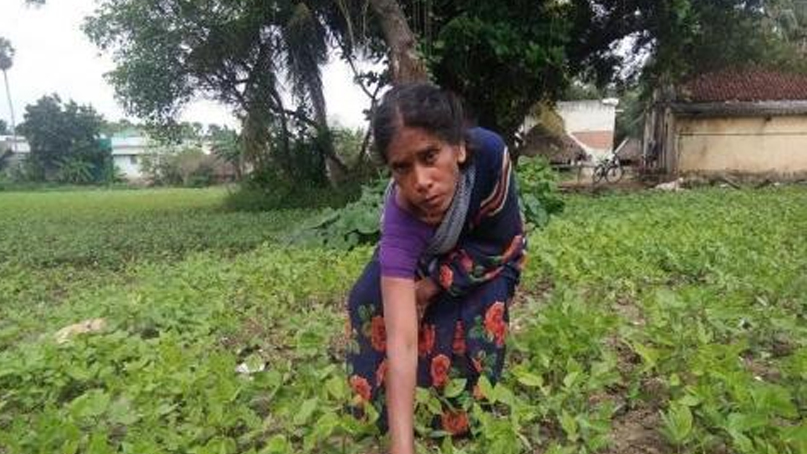 Women make up 80% of the workforce on farmland. They spend 16 hours a day on household chores and farmland. What happened to these agricultural workers in the first phase of lockdown in 2020, March – May was explored with women farmers and farm labourers in a small village called Sozhiya Sorkulam which comes under the Kodima panchayat of Villupuram district. Since the majority of the farmers in this district are small and marginal farmers, it is selected to delve into the women farmers of this district.

Most of them own half an acre to 4-5 acres of agricultural land. Like most villages, the landowners belong to a particular caste and the Dalit people work in the fields as landless agricultural laborers. However, it is noteworthy that a majority of farmers who own land in the village also work on others land for reasons including drought and economic conditions.

In Sozhiyasorkulam and the surrounding villages, the daily wage for men agriculture labourers is Rs. 500 and for women it is Rs. 100.  Until last year, the income for women agricultural labourers was only 80-90 rupees. With an increase of 10 rupees, it has gone to 100 rupees this year. Women farmers knew all the ins and outs of farming. From removing weeds and cooking for the labourers, their day-to-day chores involved a lot of unpaid labor.

The women in the village have 2-4 acres of agricultural land. That too in the name of their husbands or fathers. Before the lockdown they had planted chillies, peanuts, flowers and sesame. They borrowed Rs 30,000 to 50,000 and planted it. These are cultivation, fertilizer, tractor, and labor costs. There is no such thing as pay for women who work on their own lands. Unable to buy fertilizers and medicines, the crops were badly damaged and destroyed as the market network was cut off by the lockdown. Harvesters were not available during the lockdown. Farmers who planted flowers were often forced to pluck it themselves and throw it away in the streets. Some farmers sold for 30-40 rupees. As far as flower plants are concerned, they would decay if unplucked. The flower growers are yet to recover as the number of functions have drastically come down. Due to lack of transport, the harvested blackgram could not be taken to the procurement centre. As a result, the price of cow pea has come down by Rs 3,000 per bundle. The women said they received the money a month later. They bought a 100 kg bundle of blackgram for just Rs. 7,000.

In early April, 2020, the Tamil Nadu government ordered an exemption for agricultural work from lockdown restrictions. Despite the government’s announcement of a warehousing facility to store produce, a commodity loan facility, a complete cancellation of fees for storing vegetables and fruits in cold storages and a market fee waiver, farmers have been hit hard by the implementation issues.

Usually the farmers and their families depend on the rice provided by the Public Distribution System. While the women said that the ration rice was suitable for eating, on most occasions it is unsuitable for consumption. Their diet that included fish and meat, one day per week became impossible after the lockdown and now, their only food was ration rice.

The women there are managing both the farmland and their family. They have also mortgaged their small jewelry, like earrings and thali(mangal sutra), as they have no income in the lockdown. Children cannot be given even 10 rupees. If it is porridge everyday, the men of the house fight with the women. Women have taken loans from microfinance institutions at higher interest rates of up to Rs 2 lakh.

Most of the women in the area are either members of agricultural groups and get loans; else, they get exploited by borrowing from private financial institutions at high interest rates. Many women are able to pay for their family and farm work with loans obtained through these farming groups. Women work for wages on land and pay off such debts. Most people borrow at high interest rates from microfinance, as there are restrictions on mortgaging land to state banks and lending within permissible limits per acre. The government said financial institutions should not charge interest rate during lockdown. But, in practice it did not happen. It has become a common practice to insult women by speaking indecently while collecting debt. Bank loans did not charge interest for only three months, April, May and June and they have since then been charged.

The government started MGNREGA work from July. Even those over the age of 50 do not have that job because the risk of infection is higher. The biggest victims are women. This work has been available for about 84 days in 3-4 months in some districts. In a few districts it is only available for 6 days.

The Women Collective forum that is working for women’s rights surveyed 62 Tamil Nadu villages in April and 66 villages in September. Of these, the hunger problem, which was 24% among women in April 2020, increased to 42% in September 2020, 6 months later. The rate would now be even higher. The women have sold household utensils, sheep and cows to meet their household needs.

Women do not have access to government welfare schemes due to lack of recognition as farmers. Some women lease land and farm alone or in groups. They do not have a farmer’s card or Kisan credit card. Therefore, there is a situation where they do not get the financial assistance of Rs. 6,000 from the Central Government.

Most women are not recognized as ‘farmers’ because they do not have land in their name. The government refers to them as ‘cultivators’ and ‘agricultural workers’. Giving barren lands to women on long-term leases, giving them the status of ‘farmers’ and giving them ‘incentives’ to female farmers will be of great help and sustainability to female agricultural laborers. That way, Tamil Nadu will become self-sufficient in sustainable food production.

Corona has increased the compulsion to focus and redirect government subsidies to women farm workers, and consider them not just as wage earners but as professional producers and workers. Dismissing women agricultural workers who are a large part of the informal system is likely to have far greater socio-economic consequences than the gender equality created through educational activities.

This article originally appeared in Hindu Tamil Newspaper on The Hindu Tamil Thisai,  12 January 2021. Here is the English translation version of it.