The Covid-19 and Fishing women 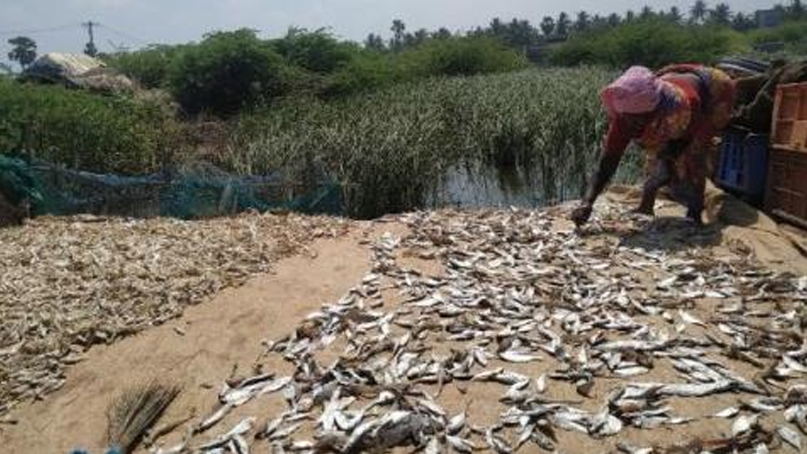 Fish is the staple food of the seafaring people and the people in Poombukar in Nagapattinam district are constantly changing their eating habits as there is no fish available due to lockdown. Nagavalli, one of the fisher women, has incurred some lakhs of debt after her husband met with an accident during the Corona period.

These fisherwomen expressed that they are not boarded onto the buses along with the public, due to the smell of the fish. This modern untouchability has increased since the corona. The women who go to sell fish at 9-10 in the morning and return at 10 – 11 at night as they are refused in the buses.

The transport, which resumed after lockdown relaxations, has ‘excluded’ fishing women. As a result, auto drivers have doubled the fare of women transporting fish to Mayiladuthurai, Kuthalam, Thiruvazhi and Sirkazhi during the lockdown. So the fisherwomen did not go elsewhere to sell the fish they were auctioning off.

On the other hand, even though the government had announced some relaxation after the lockdown, fishing is allowed only 1-2 days a week and the government has also ordered not to take the fish outside the district and sell it. As a result, fishermen are forced to destroy their favorite fish themselves.

While men in a family are involved in fishing, women in the same family are fish sellers/traders. Women are forced to lose the entire income of a family due to the inability of men to go to sea. Domestic violence has multiplied as men with daily drinking habits stay home. Fishermen who go to sea are also affected as the women who sell the caught fish during the lockdown do not buy it. They have sold off a basket-sized mix of fish that can go for 2,000-3,000 rupees for just 100 rupees, which is enough to sell anyway.

The state government provides financial assistance of Rs 5,000 to a fishing family during the fishing ban period. Single women do not get this amount. Ice was not properly available as industries did not operate during the lockdown. Salt is not available. The vegetable was then sold at a higher price. Ration rice and some vegetables are part of their daily diet. Since the COVID-19 cases were high here in the first wave, their fishing activity was badly hit. Therefore, a cold storage facility to preserve and sell the fish, basic needs like ice box, scales, mat, umbrella etc. remain as their requirements. Security at the fish market and toilet facilities should be provided.

The fishing women here go to Vanagiri and Karaikal to auction fish. It is 35 km from Poombuhar and they take the tempo to travel. There have been many accidents and deaths of women while doing so. Compensation for fishing women during the monsoon season is usually Rs. 4,500. There is a demand from these women to increase this amount in view of the post-corona environment. Special vehicle facilities for loading fish, a minimum loan at a low interest rate are some of their other demands which should be done by the Fisheries Society and not by the Bank.

This article originally appeared in The Hindu Tamil Thisai, 15 February 2021.Here is the English translation version of it.